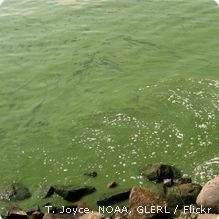 ANN ARBOR, MICH. – The state of Michigan yesterday released an action plan to help stop harmful algal blooms in Lake Erie. Conservation groups labeled the plan as incrementally better than an earlier strategy released by the state in 2016, but insufficient to prevent toxic blooms like the 2014 outbreak that poisoned drinking water for more than 400,000 people for three days.

Michigan’s plan, crafted by the Department of Environmental Quality, will inform a broader U.S. strategy—known as a domestic action plan—to confront harmful algal blooms. The U.S. domestic action plan, crafted and overseen by the U.S. EPA, is expected to be completed in February 2018. The state of Ohio is expected to submit its plan to the EPA in October.
Commenting on the plan, conservation groups said:

“In November, the State of Michigan made important progress when they declared the open water of Lake Erie impaired by nutrients. Michigan now needs to follow that designation with strong commitments to bring Lake Erie back to health. The plan released yesterday does some things well. It recognizes the state legislature as an integral partner in the effort to curb toxic algal blooms and the need to promote wise land use decisions and to protect the rivers, streams and wetlands that feed Lake Erie. We urge the state House and Senate to act with urgency on the report recommendations.

“However, the plan ultimately fails to deliver a clear roadmap on how to put an end to harmful algal blooms. The plan fails to lay out specific strategies to reduce dissolved phosphorus and relies on voluntary programs which have been effective in local communities, but have failed to offer the landscape-wide changes that are needed to solve this problem. The people, communities, and businesses which have borne the brunt of toxic blooms for the last decade deserve much better than this. We hope that other states, like Ohio, do not shy away from this challenge and instead put forward plans that tackle this problem once and for all.”

The groups offered praise for elements of the plan, such as the recommendation that the state legislature act to support reducing runoff into Lake Erie. But the plan, overall, according to groups, needs to be bolstered if it is to achieve its goal of restoring Lake Erie to health. The plan:

Lake Erie advocates have urged states such as Michigan and Ohio to work collaboratively with the U.S. EPA to craft and implement strategies that identify sources of phosphorus runoff, include specific actions to accomplish pollution-reduction goals, and provide robust monitoring and evaluation to ensure that targets are being met.

In recent years, harmful algal blooms in western Lake Erie – and around the region in places like Saginaw Bay and Green Bay – have contaminated drinking water, closed beaches, hurt fishing and tourism, and cost utilities and ratepayers millions of dollars. The severity and frequency of the blooms led to a regional agreement between U.S. governors in Ohio and Michigan and Canadian Premier of Ontario to reduce nutrients such as phosphorus into the Lake by at least 40 percent. The No. 1 cause of harmful algal blooms in Lake Erie is runoff from industrial farms that wash excess manure and fertilizers into local streams and rivers that feed the lake.

In November, the state of Michigan drew praise from conservation organizations for declaring its portion of Lake Erie as “impaired,” a designation under the Clean Water Act that means the waters do not meet federal standards for fishing, swimming, or drinking. An “impaired” designation often forces state and federal partners to put in place an action plan, enforceable under the Clean Water Act, to restore it to health. Michigan, in its impairment designation, chose not to trigger the enforceable action plan—known as a Total Maximum Daily Load—making it imperative for the state’s domestic action plan to identify where runoff pollution is coming from, how it will be reduced, and in what timeframe.