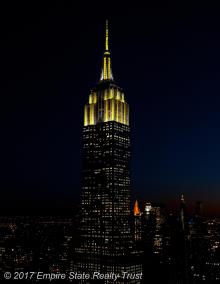 NEW YORK, NY – On June 22, the National Wildlife Federation’s Collin O’Mara will join Shark Tank host Daymond John at the Empire State Building to light the iconic tower in yellow and black stripes for National Pollinator Week. The week is an annual recognition of the important role that pollinators play in our ecosystems. Recent declines in pollinator species have made National Pollinator Week critical in helping to raise awareness and inspire people to take action. Additional North American landmarks, including Toronto’s CN Tower and Niagara Falls, will also be lit up in recognition of this week.

“Pollinator populations are crashing and it’s going to take each of us doing our part to reverse their decline, from big cities creating urban pollinator gardens to landowners prioritizing native plants and reducing their dependence on pesticides and herbicides,” said Collin O’Mara, president and CEO of the National Wildlife Federation. “Together, we can save North America’s honey bees, native bees, birds, bats, and butterflies, but only if we act quickly and together to build and restore wildlife habitat at our homes, businesses, schools, and community spaces.”

“The Empire State Building is one of the most iconic symbols of New York City. It’s also the building that’s housed the offices of my clothing business FUBU for the past 20 years,” said Daymond John. “It’s a privilege to light up the Empire State Building in honor of National Pollinator Week, which means more to me than most will ever know. Helping to reverse the decline of bees is a cause that I’m deeply committed to and I will continue to do all I can to support the cause. As a product of public schools in Queens myself, I’m especially thrilled with the National Wildlife Federation’s involvement with public school kids to restore habitat for bees and other pollinators in New York City. As I believe, bees, other pollinators and our kids are the keys to our future.”

"Pollinators, and the threats they face, highlight the importance of the environment to the well-being of New Yorkers," explained New York City Mayor Bill de Blasio. "Through the National Wildlife Federation's Eco-Schools initiative, our students are learning about not just pollinators, but how to a build a more just and sustainable city."

Pollinators-- including honeybees, native bees, butterflies, moths, beetles and other insects, as well as certain birds and bats-- fertilize plants, allowing them to reproduce and produce seeds and fruits, and are vital for the health of natural ecosystems and agriculture. One third of all the food we eat is the direct result of pollinators, contributing $29 billion to America’s food production, according to a Cornell University study. But pollinator declines in recent decades have been steep and severe due to habitat loss, parasites, pesticides, and other threats.

The National Wildlife Federation has taken a variety of actions to help stop pollinator decline. In partnership with the garden trade, other conservation organizations, and volunteer civic groups, NWF co-launched the National Pollinator Garden Network to inspire people and organizations to create more pollinator habitats. Through the Million Pollinator Garden Challenge, approximately 500,000 participants of 50 national partners’ organizations have planted or enhanced pollinator gardens. NWF has also launched the Mayor’s Monarch Pledge, with more than 300 mayors nationwide committing to making their communities more pollinator-friendly.

Just this week, Brooklyn Borough President Eric Adams has taken the Mayor’s Monarch Pledge. Representing 2.6 million people, this is the largest community to have taken the pledge.

New York City has been a leader in pollinator protection, with 520 NWF Eco-Schools, all working to plant for pollinators and raise awareness about how to help. In 2014, NWF launched Growing a Wild NYC, a year-long classroom and field-based program that teaches public school students in grades K-12 about pollinators and why their habitats are so important, and engages them in habitat restoration in local parks and schoolyards. Through a variety of local partnerships, Growing a Wild NYC has been successful in creating a network of biodiverse pollinator gardens across New York City.

“We share this magnificent city with pollinators of all kinds, from bees to butterflies. In fact, the latest science has found that urban areas are critical pollinator habitat,” said Emily Fano, senior manager of NWF’s New York City Eco-Schools program. “In partnership with the National Park Service, The Battery Conservancy, the NYC Department of Education, Groundwork Hudson Valley, and others, the Growing a Wild NYC program has, for the last three years, educated and engaged thousands of NYC students in 17 schools - in Brooklyn, Queens, and Manhattan - about the importance of pollinators to our food supply and environment. Close to 70 percent of the students in the program qualify for free or reduced lunch and over 20 percent have special needs. In many cases, these students and their adult chaperones are seeing, touching and identifying plants, insects and other wildlife for the very first time.” View photos of the program here.

Reaction from our Partners

“To commemorate the 10th anniversary of Pollinator Week, a truly international collection of events, it’s entirely fitting that we celebrate at this global icon: the Empire State Building. Lighting the building to represent pollinators clearly signals our commitment to their health, habitat, and worldwide conservation,” said Val Dolcini, president and CEO of the Pollinator Partnership, the world’s largest nonprofit dedicated exclusively to the protection and promotion of pollinators and their ecosystems.

“Through our collaboration between the National Park Service at Gateway National Recreation Area, the National Wildlife Federation and other partners for Growing a Wild NYC, we have reached thousands of young people since 2014. These students learn about nature in ways that they can apply to the park, our global environment or their own neighborhood and, in the process, develop a sense of stewardship that impacts their lives and their communities,” said Jen Nersesian, superintendent of the NPS Gateway National Recreation Area in the Port of New York and New Jersey.

About the National Wildlife Federation

About the Empire State Building