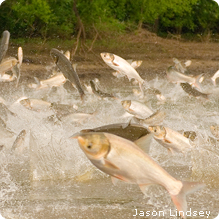 CHICAGO, IL – A bipartisan bill introduced today in Congress would push the Trump Administration to stop delaying a key effort to stop the Asian carp invasion of the Great Lakes. Conservation groups from around the Great Lakes region expressed support for the bill. The groups stressed that the current Asian carp control measures, from electric barriers to harvesting, are not enough to keep the harmful fish out of the Great Lakes.
Two years ago, the U.S. Army Corps of Engineers was tasked with studying additional protection measures at the Brandon Road Lock and Dam near Joliet, IL. The facility is a logical choke point location to install control measures to stop the fish from moving closer to the lake. The study was paid for at taxpayer expense and is ready for public review. The draft report was supposed to be released for public review and input on February 28, 2017. But, instead of releasing it to the public, the White House blocked the report’s release, leaving it hidden away on a Washington, D.C. shelf gathering dust. And with it, efforts to install critical prevention measures to halt Asian carp have all but come to a halt, putting the Great Lakes at risk.

Today a bipartisan group of legislators introduced the Stop Asian Carp Now bill, which would require the Administration to release the Brandon Road Study. The Stop Asian Carp Now bill was introduced by Senator Debbie Stabenow (D-MI) and Representatives Marcy Kaptur (D-OH) and Bill Huizenga (R-MI).  We applaud Members of Congress for pushing to make this report public and fighting to protect the Great Lakes from the serious threat posed by Asian carp. Conservation groups support the bill noting that, “the Administration has had more than three months to review the report. It is past time to give Great Lakes residents a chance to do the same.”