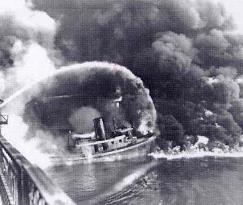 Much progress made since 1969 but river faces new challenges

CLEVELAND, OH – Marking the 48th anniversary of the most recent Cuyahoga River fire, restoration experts and civic leaders gathered today to evaluate progress and identify threats to the Cuyahoga as the milestone 50th anniversary of its famous burning comes into view.
Huge progress has been made on original challenges facing the river, leaders said, with point-source industrial pollution largely cleaned up and municipal wastewater treatment plants greatly reducing bacterial contamination.

“Forty-eight years into the burning river event that made national headlines, we’re still working on cleaning up the river, and we’re making great progress,” said Mike Foley, Director of Sustainability for Cuyahoga County.

How can progress toward river restoration is progress be measured? Experts pointed to key indicators.

“The Cuyahoga River has become a destination for paddlers, rowers, strollers, diners, cyclists. People run, walk, bike, hike along it. Before, nobody could actually be in the River. Now, everybody wants to be in it,” said Jane Goodman, Executive Director of Cuyahoga River Restoration, a nonprofit that works to restore and protect the environmental quality of the River.

“And there’s a growing fish population,” Goodman continued. “Fish are the River’s ‘canary in the coal mine’. We’ve gone from fishless to ‘fish-full’. That’s what tells us the recovery has happened.”

But “the recovery has to reach a point where it’s self-sustaining. And we’re not there yet,” she said.

Rivers are ever-evolving, and so are the threats they face, say experts. What new challenges does the Cuyahoga River face today?

Safety is one: providing for safe use by recreational users attracted to the river’s cleaner waters alongside commercial traffic. “Our challenge is to allow everyone who wants to use the river to do so safely,” said Goodman.

Roadside salt is another challenge since it washes into the river and can make the water too salty for fish, according to Goodman.

“Cleveland has become warmer by 2 degrees Fahrenheit since 1969, and we have seen a 15 percent increase in annual precipitation and a 30 percent increase in heavy downpours. These more intense rains produce more runoff of sediment and nutrients, meaning more contaminants from the landscape into the river,” said Whiting.

“And these big storms overwhelm our old sewage systems, resulting in discharge of untreated waste water into our rivers and Lake Erie,” he noted. (continued)

Policy changes and threats to restoration funding are another threat the river faces, said several experts.

The U.S. Environmental Protection Agency (EPA) has been a partner over the decades providing in research, expertise, monitoring, technical help, and funding to address the many layers of involved in cleaning the river and restoring it to a thriving home to fish, birds, and wildlife.

But that partnership could change if the budget proposed by the Trump Administration is carried out, said Tom Bullock of the National Wildlife Federation.

“President Trump and EPA Administrator Pruitt have proposed a budget that cuts EPA resources by 31 percent—devastating the agency’s ability to protect Ohio’s clean air, land, water, and health,” said Bullock. “And we hear persistent concerns about deep cuts to, or even closure of, EPA’s Region 5 office, which serves Cleveland and the Great Lakes.”

Whiting agreed the cuts would be problematic if Congress were to adopt a budget making the cuts the Trump Administration has proposed.

“The proposed cuts to U.S. agencies managing the environment – both budget and personnel cuts – will hamper our ability to develop strategies and undertake efforts to combat the worst of climate change’s effects in general and on the Cuyahoga in particular,” said Whiting.

The Trump Administration budget would also eliminate funding for the Great Lakes Restoration Initiative, which paid for work at the Scranton Flats on the Cuyahoga River.

This budget turns back the clock, something the community cannot afford, said Foley.

“We’ve worked for forty-eight years, which shows how patient, methodical, and hard-working we all must be to clean up the messes of history,” he said.

“We’ve seen this river go from near dead to being alive and thriving. We cannot afford to go back. Restoration has happened because of federal clean water standards and federal funding together with local investment,” said Goodman. “That partnership must continue, since there is work to be done to make the recovery sustainable.”