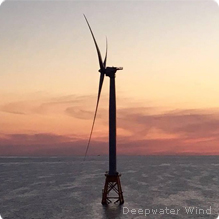 BOSTON, MA – Today, offshore wind power developers holding leases off the coast of Massachusetts have been formally invited to submit bids for projects of nationally unprecedented scale. As required by the energy diversity act signed into law by Governor Charlie Baker last summer, Massachusetts utilities have opened a competitive process for offshore wind development more than ten miles from the coast.

From this round of proposals, the utilities are required to select one or multiple developers to build a total of at least 400 megawatts of offshore wind power capacity – that’s enough clean, local energy for over 180,000 homes.

Under the shared perspective that the swift and responsible development of offshore wind power is critical to generating economic development, combatting climate change, and realizing an energy future that can protect the health of our communities, wildlife, and wild places for generations to come, a coalition of organizations provided the following comments in response to today’s milestone:

“The national significance of this moment cannot be overstated. Our most abundant, home-grown, clean energy resource will soon be delivering cleaner air, cleaner water, and quality jobs to the Commonwealth, all while helping protect communities and wildlife from climate change,” said National Wildlife Federation Senior Manager Catherine Bowes. “We urge Massachusetts’ leadership to maintain this critically important momentum toward the clean energy future within reach.”

“This is a big step for America’s offshore wind industry as companies will now be able to tell the Commonwealth how and when they’ll provide new renewable energy to Bay State electricity consumers,” said Mass Audubon’s Director of Public Policy Jack Clarke. “Their product is clean, available, and price competitive. With the denial of climate change in the White House and Congress, our work here in Massachusetts to address its impacts becomes all the more important.”

“No matter how you slice it, the future of Massachusetts’ energy grid, economy, and environment relies upon offshore wind. Today, the Commonwealth took a big step toward making that future a reality,” said Conservation Law Foundation Staff Attorney Megan Herzog.  “Though we are disappointed that regulators did not heed our call for an earlier deadline to get turbines spinning, we are confident that wind developers can propose catalyzing projects that deliver clean energy to Massachusetts residents as quickly as possible while protecting our valuable marine and coastal resources.  Conservation Law Foundation will stay engaged every step of the way to make sure Massachusetts fully seizes this opportunity for healthier air, local jobs, and climate-friendly electricity."

"Offshore wind will play a major role in getting Massachusetts off of fossil fuels and repowering our state with 100% renewable energy," sad Environment Massachusetts State Director Ben Hellerstein. "We're encouraged to see the Baker administration take this step, and we urge state leaders to do everything in their power to bring offshore wind power to Massachusetts as quickly as possible. Our climate and our health can't wait."

“350 Massachusetts for a Better Future (350mass.org) applauds the recent advances on the road to making offshore wind a critical component of our renewable energy portfolio in Massachusetts. With the approval of the ground rules drafted by utilities for requesting bids from wind power developers, the Department of Public Utilities has set the stage for a vigorous competition among the three firms hoping to participate,” said 350 Massachusetts for a Better Future Executive Director Craig Altemose. “We now look forward to seeing plans from these developers that will deliver affordable, carbon-free electricity at the earliest possible date. 350 Massachusetts joins others in calling for ambitious proposals that will swiftly realize the tremendous potential of wind power off our coast.”

“Getting Massachusetts out there looking for solid offshore wind projects and prices in a competitive way is a vital step,” said Union of Concerned Scientists Senior Energy Analyst John Rogers. “Economic development means grabbing hold of good, new areas for business and jobs. Tackling climate change means investing in expanding the tools in our low-carbon energy toolbox. And leadership means not waiting for others to go first. This step keeps Massachusetts firmly in contention when it comes to building a new industry on our shores, making a new carbon-free electricity source a reality, and leading on US offshore wind.”