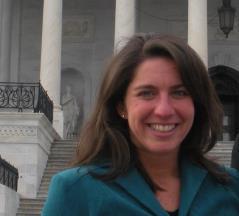 RESTON, VA – This weekend, the National Wildlife Federation recognized Angie Rosser of the West Virginia Rivers Coalition for her efforts to protect rivers and wildlife habitat in West Virginia and nationwide.

“The words ‘fearless,’ ‘tireless’ and ‘effective’ perfectly describe Angie Rosser’s advocacy for West Virginia’s waters and wildlife,” said Collin O’Mara, president and CEO of the National Wildlife Federation. “Thanks to Angie’s leadership, the West Virginia Rivers Coalition has broadened its reach and increased its impact. She is a phenomenal partner and we are honored to have her as part of the Federation family.”

The Charlie Shaw Conservation Partnership Award honors individuals who have demonstrated a true appreciation for the value and potential of the NWF-affiliate partnership. The award ceremony took place at the National Wildlife Federation’s annual meeting held at Skamania Lodge, in Stevenson, Washington.
“Every day, Angie demonstrates her leadership and her passion for rivers, wetlands and the wildlife that depend on them, both in West Virginia and nationwide,” said Hilary Falk, a regional executive director with the National Wildlife Federation, “Angie has a knack for uniting diverse voices to raise the profile of an issue, whether it is the need for clean drinking water or the importance of public lands.”

Angie Rosser joined West Virginia Rivers Coalition (WV Rivers) as the executive director in 2012, after serving on the board of directors, with a background of working in West Virginia on social justice issues in the non-profit sector. Angie brings both a professional commitment to conserving natural resources for the common good, as well as a uniquely personal desire to protect the waters of the Elk River that flow through her backyard. As the statewide voice for water-based recreation and clean rivers and streams in West Virginia, WV Rivers unites diverse coalitions who understand the connection between our public recreation lands and the waters on which we all rely. When 2014’s chemical spill occurred on the Elk River in West Virginia, Angie was there to bring voice to the hundreds of thousands of people without water. Named the West Virginia Headwaters Waterkeeper, Angie’s work is instrumental to the protection of the six rivers within the Monongahela National Forest which provide drinking water for millions of Americans. With Angie at the helm, WV Rivers has increased its influence at both the state and federal levels, highlighting the need to keep public lands public for all Americans. As an integral part of the National Wildlife Federation, Angie serves as co-chair of the Water Caucus and as co-chair of the Choose Clean Water Coalition, which works to protect and restore the Chesapeake Bay Watershed. Angie works to create partnerships on conservation issues with leaders from across the country, but it’s her deep passion for the work that inspires others in the Federation and beyond.