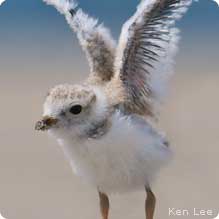 Last week, contractors to the State of Michigan presented a flawed draft analysis of alternatives to Enbridge’s Line 5 pipeline in the Straits of Mackinac at a meeting in Holt, Michigan.  The draft failed to adequately account for the potential impacts to businesses if oil spills from Line 5.  For Great Lakes business leaders, the oil pipeline represents a direct threat to the Pure Michigan tourism economy and the jobs of their employees. In the final video in the National Wildlife Federation’s series on the Kalamazoo River oil spill and Line 5, members of the Great Lakes Business Network describe how the risk of a Line 5 oil spill impacts them.

“Line 5 is the greatest threat to our economy up here in northern Michigan,” said Bob Sutherland, owner of Cherry Republic in Empire, Michigan, which employs 300 people making cherry-based products for northern Michigan tourists attracted to Lake Michigan. “For the hundreds of thousands of people who depend on that lake for their livelihood, this tourism industry would be really thrown into a tailspin.”

“Not only is our lifestyle at stake, but our businesses are very much at stake,” said Beryl Skrocki, owner of Sleeping Bear Surf and Kayak, a family-run business in Empire, Michigan, which sells and rents outdoor recreation equipment like surfboards, kayaks and stand-up paddleboards. “A Line 5 spill, for us as a business, we’d be finished. We’d be done.”

“We have oil that’s coming from Canada, passing through Michigan, and the great majority of it goes to Canada,” said Larry Bell, owner of Bell’s Brewery, which employs 540 people in Michigan. “As Michiganders, we take all this risk – both from a business standpoint and an environmental standpoint – for the profit of a Canadian oil company.”

The video is available at: https://youtu.be/W9c0lWPsqZs

This is the fifth video in a series of videos and infographics commissioned by the National Wildlife Federation and produced by Bill Latka of Storylicious. The series focuses on both Enbridge’s oil spill into the Kalamazoo River in 2010 and the risk of a similar occurrence with its Line 5 pipeline in the Straits of Mackinac.

The first video – “The Kalamazoo River Oil Spill Disaster” (https://youtu.be/YqLGuNDxPTw) -  was released in late May and featured Larry Bell, owner of Bell's Brewery, Mark Schauer, former U.S. Representative for the district, John LaForge, whose home was ruined by the spill, and Dr. Kenneth Kornheiser, acting director of the Kalamazoo River Watershed Council, discussing how the spill happened and its immediate impacts. It was accompanied by an infographic, available at http://bit.ly/KzooRiverOilSpill, detailing the impacts of the spill.

The second infographic (http://bit.ly/29spillsLine5) detailed the 29 oil spills and leaks that Line 5 has had on its inland sections since 1968, uncovered through research conducted by Beth Wallace, pipeline safety specialist for the National Wildlife Federation, from publicly available records.

The next video – “Seven Years and Counting” (https://youtu.be/bQyK-Q8LMLw) - followed up on the first by examining the longer-term impacts and ongoing cleanup of the Kalamazoo River oil spill through interviews with Paul Makoski, director of environmental health for Calhoun County, Dr. Kenneth Kornheiser, acting director for the Kalamazoo River Watershed Council, and former Congressman Mark Schauer.

The fourth video – “Northern Michigan Business Owners Say Line 5 Not Worth the Risk” https://youtu.be/A6XpNnBcTJw) - featured northern Michigan business owners Chris Shepler of Shepler’s Mackinac Island Ferry, Noah Marshall-Rashid of American Spoon, and Rich Bergmann of Lake Charlevoix Brewing Company discussing how a rupture or spill from Enbridge’s Line 5 in the Straits of Mackinac would impact their businesses and the economy, environment and culture of northern Michigan. It was accompanied by an infographic (http://bit.ly/propanealternatives) showing viable alternatives for providing propane to the Upper Peninsula other than Line 5.

All videos and infographics in the series, as well as additional resources, are available at http://blog.nwf.org/2017/05/line-5-oil-pipeline-a-threat-to-the-great-lakes/.