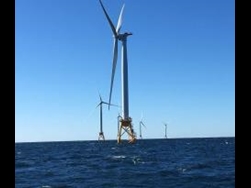 New York Can Be National Leader in Launching New Industry, Creating Thousands of Jobs and Powering Over 1.25 Million Homes

ROCKAWAY BEACH, NY – New York’s business, environmental, labor, and community leaders rallied today in support of Governor Cuomo’s plan to make offshore wind a key component of the state’s strategy to increase renewable energy and spur economic development for New Yorkers.
This unique, diverse coalition has come together in advance of a series of New York City public meetings on offshore wind hosted by the New York State Energy Research and Development Authority (NYSERDA) to urge New York’s leaders to smartly and aggressively move forward on offshore wind power and the jobs, economic activity, and cleaner air it will bring. Today’s news conference builds on the momentum from last month’s public meetings on Long Island (details here), where a similar coalition of Long Island business, labor, environmental and political leaders organized to demonstrate their support for offshore wind power.
NYSERDA’s public meetings are part of its process to create an Offshore Wind Master Plan to advance projects that could provide electricity to more than 1.25 million homes on Long Island and New York City. Additionally the plan will help fulfill Governor Cuomo’s commitment to have 50 percent of New York’s power generated by renewable energy sources by 2030 – a goal that cannot be met without clean, local, emission-free and cost-effective energy from offshore wind power projects.

NYSERDA’s Offshore Wind Master Plan will create a roadmap for how New York can take advantage of the strong winds far off the coast of New York and at the same time protect our coastal and marine wildlife and preserve existing offshore industries and activities.

“I cannot wait to see those beautiful, white and majestic wind turbines rising from the ocean off the shore of Long Island. Offshore wind power will not only reduce greenhouse gas emissions and combat climate change, it will also generate jobs and stimulate local economy. With the planet warming at an alarming rate we do not have a moment to lose in developing offshore wind.”
Food & Water Watch Senior Organizer Eric Weltman said:
“As we approach the five-year anniversary of Superstorm Sandy, its all the more important that Governor Cuomo lead in protecting New York from climate chaos. New York must transition from dirty fossil fuels to renewable energy. Offshore wind will play a crucial role in New York making the necessary transition to renewable power.”
Green Education and Legal Fund and the 100% Renewables Now NY Campaign Chair Mark Dunlea said:
"We look forward to a strong commitment from New York State to promote the development of offshore wind, especially off of Long Island. We hope the plan will include firm commitments to have the state and utility companies purchase wind and spur the investment needed to create living wage jobs and clean energy. As Amory Lovins recently pointed out, the best way for the state to reduce carbon emissions is not bailing out old nuclear plants but investing in renewables and energy efficiency,"
About the New York Offshore Wind Alliance
The New York Offshore Wind Alliance (NYOWA) is a diverse coalition of organizations with a shared interest in promoting the responsible development of offshore wind power for New York. A project of the Alliance for Clean Energy New York (ACE NY), NYOWA has a particular focus on Governor Cuomo's goal of creating 2,400 MW of offshore wind power by 2030.
For more information see: www.aceny.org/NYOWA