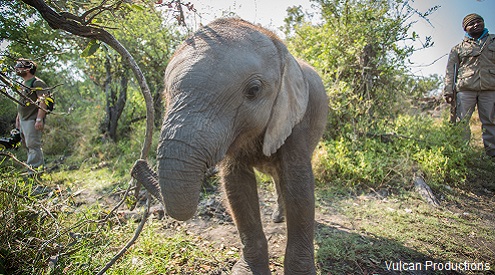 Arkansas Youth Will Travel to Africa to Share his Winning Idea to Halt Elephant Decline, and Meet Naledi, the Baby Elephant who Inspired the Contest

WASINGTON, DC. – What better way to celebrate World Wildlife Day than to win the Every Elephant Counts Contest and an all-expense-paid trip for three to Abu Camp in the Okavango Delta, Botswana to experience a true African Safari? National Wildlife Federation and Paul G. Allen’s Vulcan Productions asked students ages 9-18 to help find the next big idea that could make a material difference for African elephants. Ben Radke, age 12, from Ozark, AR, came up with the winning idea, “Elephant Pride and Bus Rides.”

Radke noted that many Botswanans use minibuses to get around. “If we put pictures of elephants, and facts about them, that would reinforce pride in how amazing African elephants truly are. The way I thought of this was by seeing U-Haul trucks with their pictures. One banner or poster could say Elephants Are Essential For Survival Of Many Other Creatures Like Water Buffalo, or something like that… If people are proud of their animals, they will feel killing elephants is a personal insult.” The same is true if efforts were made to motivate change through similar methods in countries that still value ivory. Radke believes that change comes from a local level, and sometimes the best defenders of wildlife, are the people closest to them. This is why building national pride around elephants is so critical to their recovery.

“Kids across America are showing how much they can do to make an impact for wildlife," explained Collin O'Mara, President and CEO of the National Wildlife Federation. "Children don't see the same limitations adults do—and Ben’s solution is a perfect example of an innovative, out-of-the-box solution. When presented with a complex problem, children always amaze me with the brilliant solutions they come up with. I'm hopeful that we can catalyze this creative energy to save the full diversity of wildlife across our nation and around the world."

We now know that we are losing 96 elephants a day, or 25,000 to 30,000 annually. Data from Paul Allen’s 2016 Great Elephant Census>found that we have lost 30 percent of the African savanna elephant population in less than 7 years. The National Wildlife Federation and Vulcan Productions joined forces to launch the Every Elephant Counts Contest to bring attention to the African elephant crisis and engage youth in helping to solve the problem.

The project was inspired by the real story of Naledi, One Little Elephant, a documentary film produced by Vulcan Productions which premiered on PBS: NATURE’s Season 36 in late 2017. Naledi’s mother died when she was just 6 weeks old and she required a dedicated team of people to step in to save her life. Far from unique, Naledi’s story illustrates the problems that have led to the current elephant crisis. Ben and members of his family will travel to Botswana this spring to meet Naledi as part of their prize package. 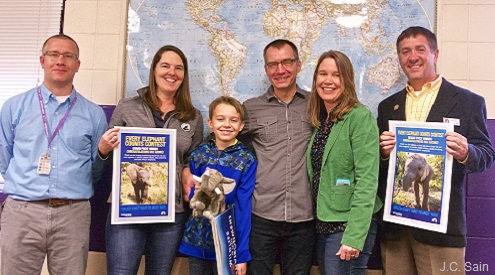 “It’s so rewarding for us at AWF to see that a young boy, not from New York or L.A., but from Ozark, AR, has the understanding, the cultural sensitivity, and above all, the passion to win the Every Elephant Counts Contest, exclaimed Jim Taylor, Arkansas Wildlife Federation board member. “We couldn’t be more proud and I cant wait to see what sort of action his idea inspires, not just in Botswana, but here in Arkansas and even around the world.”

Vulcan Productions and NWF encourage parents, teachers and students to continue using  classroom activities to build their knowledge of African elephants and think critically about the issues affecting their survival. By doing activities in the classroom or as part of a club project, students will be better prepared to describe their understanding of the science and human dimensions affecting African elephants’ survival.