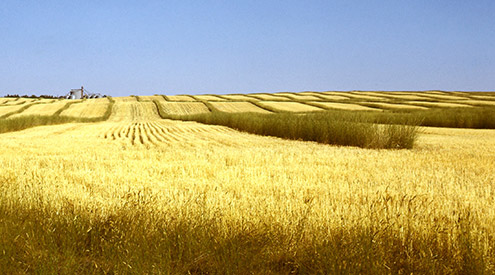 NWF Calls for Return to Bipartisanship on Farm Bill

WASHINGTON – The House Agriculture Committee is scheduled to mark up a version of the 2018 Farm Bill (H.R. 2 – the Agriculture and Nutrition Act of 2018) tomorrow. Aviva Glaser, agricultural policy director for the National Wildlife Federation, urged the Committee to return to bipartisanship and make needed improvements to strengthen the current draft of the bill:

“The farm bill is the largest single federal source of conservation funding on private land. Over the past half-century, the farm bill’s conservation programs have done much to enable farmers and ranchers to help conserve and improve America’s grasslands, waterways, and wildlife habitat. The bill’s conservation title has ‘good bones’ and could become a solid piece of legislation. We’re particularly pleased with the five million acre increase in the conservation reserve program, the significant increase of funding for the easement program and the continuation of the Regional Conservation Partnership Program. However, the bill cuts nearly $800 million from the conservation title over a ten-year period—this funding needs to be restored.

“Unfortunately, the bill also contains several ‘poison pill’ provisions that would have disastrous consequences for wildlife, lands, and clean water. For example, the bill would allow pesticides to be sprayed directly into rivers, streams and wetlands without any real oversight. Federal wildlife officials would no longer need to consider the effect of pesticides on endangered species. The bill contains numerous provisions that could harm our nation’s forests. Collectively, the draft undermines the Clean Water Act, the Endangered Species Act and the National Environmental Policy Act. We are unable to support the bill as long as these damaging and unrelated provisions remain part of it.

“The farm bill affects everyone in the country. Congress should work in a bipartisan fashion to jettison the damaging environmental provisions and strengthen and fully fund the conservation title of the bill.”