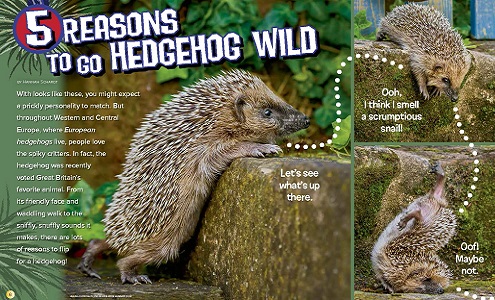 Washington, DC - The National Wildlife Federation and its treasured publication, Ranger Rick magazine, are pleased to announce Jean-Louis Klein and Marie-Luce Hubert as the winners of the Ranger Rick 2017 Photographer of the Year Award. Each year this award is given to the professional photographer or photography team whose work in Ranger Rick has most effectively advanced the magazine’s mission: to inspire in young children a love and understanding of wildlife and the natural world.

Klein and Hubert live in France, but they travel around the world photographing all kinds of wildlife. You’ll find their eye-popping pictures in several 2017 Ranger Rick issues, including wild burros in April, cheetahs and hedgehogs in August, and gray wolves in November - all of which are an outstanding contribution to the magazine’s mission.

Ranger Rick’s photo editor, Susan McElhinney, said about the photographers, “The respect and love that Klein and Hubert have for wildlife makes the pages of Ranger Rick come alive with the genuine personalities of their subjects. In turn readers can journey to where those wolves live, and feel that passion for the animals. This is the secret potion of Ranger Rick photos and Klein and Hubert have the formula.”

Hubert’s love of photography began when her father gave her an old Pentax camera to document her research as a biology student. She developed an interest in the survival abilities of animals in the Arctic and made a habit of living with the wildlife she photographed for weeks at a time. Klein decided he wanted to be a wildlife photographer after watching a documentary on swans as a young boy. He later got a job as a forest ranger where he became an expert in getting close to wild animals normally wary of hunters. The pair met during an expedition to Greenland in 1989 and discovered a shared passion for wildlife, conservation, and the beauty of the world’s vast landscapes. Since then they have traveled the world photographing everything from wild canids to great apes. Their images have also been awarded several prizes in the prestigious "BBC Wildlife Photographer of the Year" contest including first prize in the category "Birds" in 1989, and in 1994 three images of Arctic foxes were awarded in the category "Mammals."

Along with the distinction of being named Ranger Rick Photographer of the Year, Klein and Hubert receive a $1,000 prize and an announcement in the June/July 2018 issue of Ranger Rick.