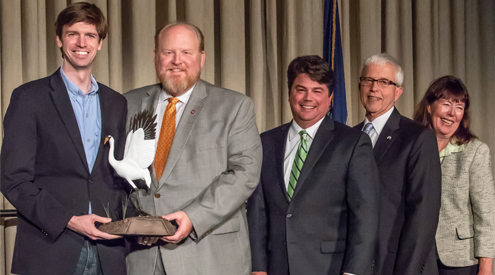 Tennessee Wildlife Federation Honored With Affiliate of the Year Award

Reston, VA – This week, the National Wildlife Federation recognized the Tennessee Wildlife Federation for its vast accomplishments in the field of conservation, as well as its longstanding commitment to protecting the state’s wildlife and water resources.

The ceremony took place at the National Wildlife Federation’s annual meeting and 82nd anniversary celebration, held in Chantilly, Virginia. The National Conservation Affiliate of the Year Award honors an affiliate organization for its conservation accomplishments and contributions to collaborative efforts across the Federation.

Tennessee Wildlife Federation was founded in the 1940s to support natural resource conservation in the state, spearheaded the formation of the Tennessee Game and Fish Commission. With this early victory, the Federation began its unwavering advocacy for the state’s wildlife and natural places. The organization has since impacted public policy affecting Tennessee’s great outdoors in both sweeping and nuanced ways—from science-based resource management to the 2012 adoption of an amendment to the Constitution of Tennessee enshrining citizens’ right to hunt and fish.

During the last 20 years, Tennessee Wildlife Federation has broadened its efforts to include stewardship and youth engagement programs, ensuring that the organization’s legacy can be enjoyed and sustained by future generations. These include its Tennessee Scholastic Clay Target Program and Youth Hunting & Fishing Program that introduce outdoor sports to kids and engage young conservationists. Tennessee Wildlife Federation created a Hunters for the Hungry program that provides donated venison to local food banks and soup kitchens and created a Habitat Conservation program that actively conserves and restores forests, fields, wetlands, rivers, and streams for generations to come.

As a leader at the state and federal level, Tennessee Wildlife Federation’s accomplishments are many and include helping return signature species such as the bald eagle, river otter, and elk to the Tennessee ecosystem; stopping the channelization of streams and rivers by the Army Corps of Engineers through a landmark legal case; engaging thousands of youth each year in the outdoors; conserving and restoring more than 13,000 acres of land; and working for the passage of state conservation bills on everything from wildlife funding to the protection of the state’s waterways and wildlife.