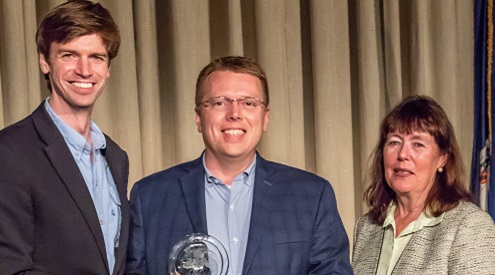 Reston, VA – The National Wildlife Federation has recognized Dave Chadwick for his efforts to engage a diverse set of actors in the conservation movement.

The Charlie Shaw Conservation Partnership Award honors individuals who have demonstrated a true appreciation for the value and potential of the NWF-affiliate partnership. The ceremony took place at the National Wildlife Federation’s annual meeting and 82nd anniversary celebration, held in Chantilly, Virginia.

Dave Chadwick is the Executive Director of the Montana Wildlife Federation (MWF). Since he joined MWF in 2013, Dave has nearly doubled their budget and staff and has been revamping the board to include a broader set of constituencies and skillsets. Dave leads MWF with an emphasis on partnerships and collaboration, demonstrated in his commitment to build the capacity of their affiliate organizations, as well as to grow relationships with new and old partners, ranging from Trout Unlimited to the Rocky Mountain Elk Foundation to Montana Audubon and the Montana Wilderness Association. He has led MWF to organize a coalition of the state's 12 major hunting and angling organizations and has reopened lines of communication with many interest groups across the political spectrum. Dave organizes a monthly call of executive directors of affiliates in the Rocky Mountain region and has helped with numerous policy and organizational initiatives for the Federation. Through Dave’s leadership, MWF has deepened its partnership with the National Wildlife Federation on campaigns such as climate change, wildlife funding, clean water, public lands, and sage grouse issues, as well as in a number of other ways. He played a key role in ensuring that the voice of affiliates was included in the National Wildlife Federation’s Strategic Plan and is an advocate for One Federation, serving as co-chair of the Conservation Funding caucus and member of the One Federation Advisory Board. Originally from South Dakota, Dave has lived in Washington D.C., Minnesota, Colorado, and Montana. Dave has 20 years of experience in the public and nonprofit sectors, focused largely on conservation issues. His background includes several years on Capitol Hill, both as staff for a US Senator and as a lobbyist for the Association of Fish and Wildlife Agencies. Dave has extensive training and experience in collaboration and consensus-building, and is an avid angler and bird hunter.