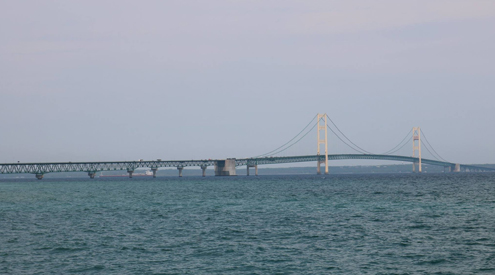 “We appreciate Sen. Peters for holding this critical hearing on pipeline safety in the Great Lakes,” said Mike Shriberg, the National Wildlife Federation’s Great Lakes Regional Executive Director, who testified at the hearing. “His leadership on protecting the Great Lakes from Line 5 has driven positive action on the federal and state level.”

At the hearing, Sen. Peters questioned two panels of witnesses including:

“We know that an oil spill in the Great Lakes would be absolutely catastrophic for our environment and our economy,” Sen. Peters said in his opening remarks. “If you’re looking for the worst absolute place for an oil disaster to occur, it would be the Straits of Mackinac.”

During the hearing, Peters questioned witnesses about the response to the April anchor strike which dented Line 5. What emerged during the hearing was the fact that not only was Line 5 dented, but it was also gouged. Peters drew applause from the full crowd at the Dennos Museum Center when commenting that the delay in inspection of Line 5 following the anchor strike was “unacceptable.”

Larry Bell, owner of Bell’s Brewery in Kalamazoo, Upper Hand Brewery in Escanaba and a member of the Great Lakes Business Network, testified about a how a Line 5 oil spill could impact businesses like his in the Great Lakes.

“Mackinac Island would be toast, right away,” said Bell. “We’d have oil on the beaches of Mackinac Island. This is a really important place where I do a lot of business – we make private label beer for the Grand Hotel – and tourism could be affected for a generation to come.”

During the hearing, he also secured a commitment from Enbridge to release all documentation of the damage sustained to Line 5 from the anchor strike, including videos and images; previously, they had only released grainy photos of the dented area.

“That’s a good step,” replied Shriberg. “It shouldn’t take a hearing with the sitting U.S. senator, although I appreciate you having this to get to the bottom. What I would like to see is that being a standard practice, not something that a special hearing would have to come to, but thank you, Senator.”

The full video of the hearing can be watched here.