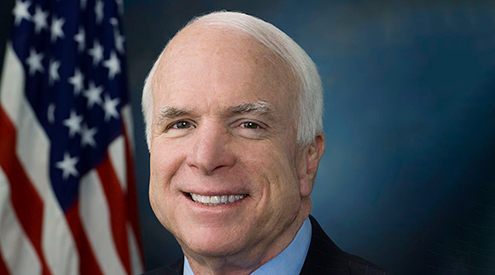 Washington, DC — Sen. John McCain, a longtime advocate for conservation even when it wasn’t politically popular within his caucus, has died at the age of 81.

Collin O’Mara, president and CEO of the National Wildlife Federation, said in response:

“While much has been rightfully written about Sen. John McCain’s heroism and commitment to America’s security, his significant conservation legacy—inspired by President Teddy Roosevelt and fostered by Rep. Mo Udall—should not be overlooked. Like TR, he believed conservation was a core conservative value. He advocated for balanced stewardship and was a lifelong advocate for public lands and wilderness.

“Sen. McCain’s leadership, with Rep. Udall, was essential to passing the Arizona Desert Wilderness Act of 1990 that protected over a million acres. He vigilantly protected the Grand Canyon. He fiercely defended scientific research and spoke out against special interest attacks on public health.

“While we didn’t agree on every vote, we at the National Wildlife Federation were proud to honor Sen. McCain with our highest conservation achievement award—and even more proud to call him a friend.”

Among the highlights of Sen. McCain’s conservation legacy: