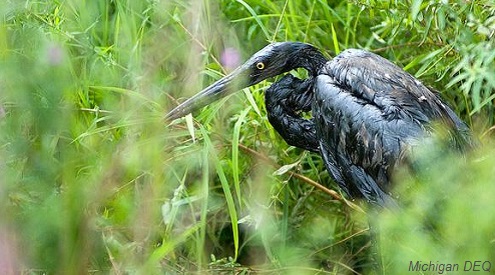 WESTPORT, N.Y.  — Policymakers should act to eliminate oil train traffic along Lake Champlain and through the Adirondack region and take other steps to reduce the risk oil shipments pose to the region’s communities and wildlife, according to a new report from National Wildlife Federation, the Adirondack Council, Environmental Advocates of New York and the Vermont Natural Resources Council. The report, Danger on the Tracks: Oil-by-Rail’s Threat to Lake Champlain and the Adirondack Region, comes as market forces are again driving increased numbers of dangerous oil shipments along the rails hugging Lake Champlain’s shores.

“Oil trains continue to pose an unacceptable and potentially growing risk to dozens of communities as well as wildlife and important habitat areas in one of the northeast’s – and the nation’s – most treasured landscapes,” said Jim Murphy, Senior Counsel for National Wildlife Federation.  “A rail accident in this remote region could spell unimaginable disaster for the people and natural resources of Lake Champlain and the Adirondacks.”

This report comes after conservationists breathed a sigh of relief this summer when oil companies agreed to remove their derelict oil tankers rail cars from an idle rail line in the Adirondack Park.  The report reminds regional and federal officials that oil transportation still poses a significant threat to the park’s Lake Champlain Valley and the communities on both sides.

“Oil trains threaten the clean water, wetlands, wildlife, fish, forests, farms, and public lands of the Adirondack Park,” said William C. Janeway, Executive Director of The Adirondack Council. “The Adirondack Park is a national treasure that deserves protection equal to national parks.  No one would tolerate oil train traffic through Yellowstone or Yosemite.  But New York can’t stop the traffic on its own.  We need federal cooperation.”

“While community leaders and advocates for clean air and water have been able to slow the expansion of oil-by-rail—earning important wins like the halting of Global Partners oil hub in Albany, which was poised to expand tar sands crude oil shipments from Canada, as well as stalling the permitting of the Pilgrim Pipeline—much more needs to be done,” said Conor Bambrick, Air & Energy Director at Environmental Advocates of New York. “We must continue the work on behalf of the health and safety of our communities and bring an end to all oil train traffic in New York.”

“This report is a reminder that a serious threat remains.  Crude oil shipments from North Dakota and Canada could cause an unimaginable disaster that could impact Lake Champlain for generations,” said Johanna Miller, Energy & Program Climate Director of the Vermont Natural Resources Council.  “There is no need to accept this risk for oil we don’t need.  More than 180,000 people in New York and Vermont drink Lake Champlain water.  We can live without oil; we can’t live without water.”

The report comes two years after over eighty groups, municipalities, and former and current policymakers requested that Congress ban oil-by-rail traffic through the region because the risks are too high.  The report’s recommendations include:

The full report can be accessed at www.nwf.org/DangerOnTheTracks.