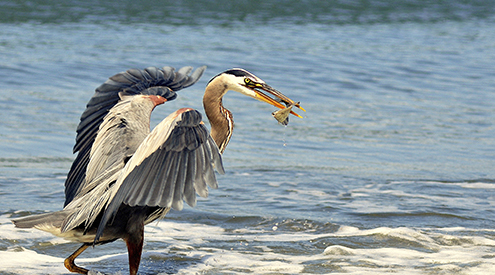 NEW ORLEANS – The U.S. Army Corps of Engineers (Corps) recently released a Final Scoping Report for the Mid-Barataria Sediment Diversion, a Coastal Master Plan project that would reconnect the Mississippi River to nearby wetlands to build and maintain land in Louisiana’s Barataria Basin. The report is based on 871 individual comments sent to the Corps to inform the development of an Environmental Impact Statement (EIS) for the project.

Restore the Mississippi River Delta, a coalition of national and local conservation groups working together to address Louisiana’s land loss crisis, has been advocating for swift implementation of the Mid-Barataria Sediment Diversion – one of the coalition’s 17 priority coastal restoration projects.

“The release of the scoping report is an important step forward in getting this critical restoration project built,” said Natalie Peyronnin, director of science policy for Mississippi River Delta restoration at Environmental Defense Fund. “The substantial, largely favorable public comments on this project demonstrate how critical it is to Louisiana’s future.”

“Without action, Barataria Basin could lose an additional 500 square miles of land,” said David Muth, director of Gulf Restoration with the National Wildlife Federation. “There is no future for vital estuarine habitat in the basin without the Mid-Barataria Sediment Diversion, and the threat to New Orleans and coastal communities continues to rise as each acre of wetlands disappears.”

“The Mississippi River is the most powerful natural tool we have to push back against rising seas, land loss and hurricanes,” said John Lopez, director of the Coastal Sustainability Program at Lake Pontchartrain Basin Foundation. “It’s well past time we construct large-scale sediment diversions and put the mud and dirt in the river to work building land to better protect our communities, industries and wildlife.”

“It is urgent that the Army Corps of Engineers and other involved parties move swiftly to get this project constructed by 2020,” said Kimberly Davis Reyher, executive director of the Coalition to Restore Coastal Louisiana. “Any further delays put our entire region at immense risk and constitute a missed opportunity to turn the tide on our severe land loss crisis.”