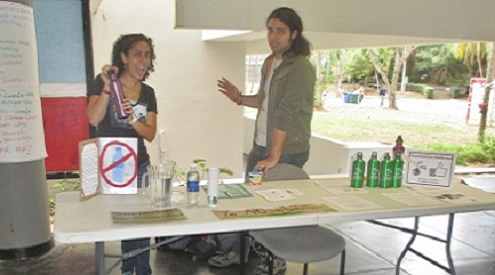 Reston, VA – Today, National Wildlife Federation has announced a new partnership with RecycleMania, a college and university recycling competition to promote waste reduction and recycling activities on college campuses and in their nearby communities. 2019 RecycleMania registration is now open.

The goal of this coming year’s campaign is to exceed these accomplishments by engaging more students and campuses on working hard to keep discarded solid waste out of the national environment.

Since the competition launched in 2001, millions of students at nearly 1,000 colleges and universities have recycled and composted over 960 million pounds of material during the tournament timeframe. Together, tournament participants have prevented the release of nearly 1.46 million metric tons of carbon dioxide equivalent, which is comparable to removing over 300,000 passenger vehicles from the road for one year.

The National Wildlife Federation sees getting a handle on trash and related pollution as critical to the future of wildlife. Each year, copious amounts of plastics and other recyclable materials end up in the natural environment – our rivers, lakes and oceans.  In the United States we throw away 35 billion plastic water bottles every year. Much of this plastic ultimately ends up in the ocean, taking the lives of tens of thousands of marine animals, millions of sea birds and countless numbers of fish and other creatures every year. By recycling and responsibly disposing of waste we can better protect our wildlife, so iconic species like sea turtles and whales remain healthy for generations to come.

“The National Wildlife Federation has been working with campuses on sustainability efforts, including waste reduction and recycling for nearly 30 years, explained Kevin Coyle, Vice President of Education, National Wildlife Federation. “This campus competition will help millions take actions and learn behaviors that will save fish and wildlife and clean up the human environment.”

“This new added partnership is a huge milestone for the national RecycleMania competition” said RecycleMania, Inc. Co-founder and President, Stacy Wheeler. “We believe that teaming up with the National Wildlife Federation will help further advance our goals of improving recycling collections and reducing waste in our communities.”

By partnering with RecycleMania, National Wildlife Federation will be able to reach even more young leaders and encourage them to make a difference on campus and beyond.

The RecycleMania Board of Directors is currently seeking several (3 to 5) interested individuals to be part of the upcoming 2019 board.  Please click here for details. Interested candidates should submit a 400 word statement of interest before the end of the business day on Friday, November 2, 2018.