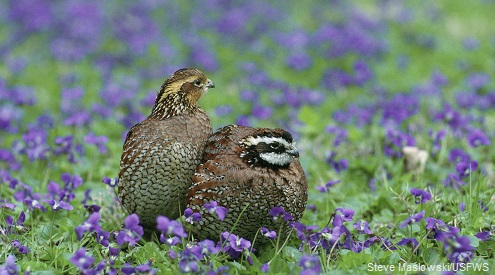 “As our nation confronts the emerging sixth extinction, it will take consistent, collaborative work to turn this crisis around.”

WASHINGTON–Today, the Senate Environment and Public Works Committee held a hearing looking at funding needs for wildlife. The National Wildlife Federation and all of its state affiliate organizations with senators on the EPW committee released a letter encouraging passage of a fully-funded version of the Recovering America’s Wildlife Act.

“America is facing a wildlife crisis with one-third of our nation’s species at-risk. The Recovering America’s Wildlife Act is a fiscally responsible way to address this crisis through on-the-ground collaborative conservation. It will allow states to take proactive, targeted steps to recover species before they have declined to the point of needing protection under the Endangered Species Act.

“As our nation confronts the emerging sixth extinction, it will take consistent, collaborative work to turn this crisis around—restoring habitats, working with landowners, removing invasives, and eradicating emerging diseases—all of which require reliable, dedicated funding.

“We appreciate the committee taking a serious look at wildlife funding today and we urge the committee to advance the Recovering America’s Wildlife Act with dedicated funding.”

Note: S. 3223 is the companion bill of H.R. 4647 which has more than a hundred bipartisan cosponsors and would create the necessary funding consistency by dedicating $1.3 billion annually from existing oil and gas revenues.