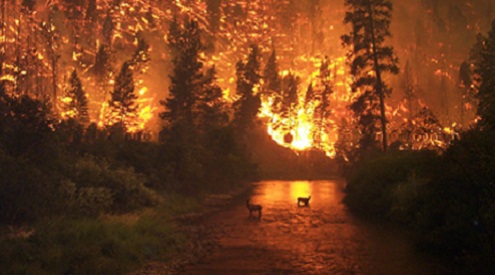 WASHINGTON, D.C. — The U.S. House of Representatives should swiftly pass a new disaster supplemental appropriations bill, H.R. 268, and deliver long-overdue support to Americans, from Florida and the Carolinas to California to the Northern Marianas Islands, the National Wildlife Federation said today.

“Americans devastated by California mega fires, Hurricanes Florence and Michael, Typhoon Yutu, and other disasters have been re-victimized in recent months by Congress’s failure to send aid as well as the ongoing, partisan government shutdown. This supplement is overdue but welcome,” said Laura Daniel Davis, vice president for conservation strategy at the National Wildlife Federation. “Congress should pass this package as quickly as possible and reopen the federal government to ensure help arrives for families, businesses and communities alike.”

“Hurricane Florence came through like a wrecking ball, leaving destruction in its large swath, followed soon after by Hurricane Michael with historic flooding and high winds that inflicted damage across our entire state,” said Tim Gestwicki, CEO of North Carolina Wildlife Federation. “Our communities, farmers, parks and wildlife refuges suffered immensely under these storms, and continue to suffer now with the inability of our federal government to do their jobs.”

The disaster supplement, H.R. 268, includes the following important provisions that will benefit wildlife and communities affected by recent disasters, while helping to improve our nation’s resiliency into the future: