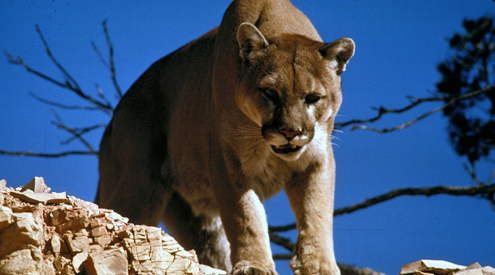 Reston, VA — For its Innovative Product of the Year Award, The Public Lands Alliance – which represents member organizations that serve over 600 public land sites across the United States – is recognizing work by National Wildlife Federation and partners to save a population of urban mountain lions.

P-22, the famous mountain lion who crossed two major freeways to find a new home in Los Angeles, has become an icon for the urban wildlife conservation movement and his story has captured the imagination of the world. To raise awareness for a campaign to prevent the extinction of mountain lions in the Los Angeles area, the National Wildlife Federation and National Park Service in the Santa Monica Mountains National Recreation Area developed a specialty P-22 educational plush toy.

The National Wildlife Federation and National Park Service work cooperatively to ensure a future for mountain lions and all wildlife in the park and region by collaborating on #SaveLACougars, an initiative to build the largest wildlife crossing in the world over one of the busiest freeways in the country to save a population of mountain lions from extinction. The project also includes public outreach that educates and engages people of all ages about Los Angeles’ native wildlife, to inspire them to take action to protect wild things.

"The partnership between the land agency and the nonprofit, along with the manufacturer, was crucial to the success – and integrity – of developing this unique product,” said Beth Pratt, California regional executive director for the National Wildlife Federation. “The goal of this project extended far beyond just offering a cute animal toy for sale. The P-22 plush needed to be a product that also acted as a tool for education and inspire real action. It also had to respect the public’s appreciation for a well-known and beloved animal celebrity.”

All partners brought their complementary areas of expertise to the project. The National Wildlife Federation, one of the oldest and largest conservation groups in the country, has a long legacy of offering high quality educational programs and products, such as Ranger Rick. The National Park Service, as the land management agency and research entity, provided invaluable input and review. And Wildlife Artists Inc., the designer and manufacturer for the project has a reputation for high-quality products, long experience with public lands partners, and for their commitment to conservation with other items developed in their catalog. Instead of using a stock item, Wildlife Artists designed from scratch a P-22 custom plush, using photos of P-22 to ensure his likeness – even spray marking his face to match his features. The National Park Service scientists provided guidance on the realism of the features, as well as collar and tag placement on the toy, which represents the research study they have undertaken since 2002.

One challenge with using P-22 as a spokesperson of sorts, is that he (and all mountain lions) is an animal seldom seen. A plush toy is an innovative way to foster a personal connection with this animal, and one that appeals to a wide demographic of people. The stuffed toy is irresistible, and both strengthens existing connections to the cat – and urban wildlife – and also has cultivated new followers, some who may not have previously been involved in conservation or environmental causes. The toy also serves as an entry point (and an accessible one), to learning more about the National Park Service science behind the project – it is fitted with a tracking collar and research tag, and an educational information tag is affixed to each one. The sharing of images of the toy on social media (on P-22’s Facebook page, and people’s personal pages), is already inspiring conversations and connections around the world on coexisting with mountain lions.