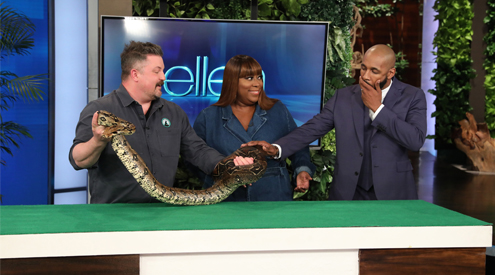 Los Angeles — National Wildlife Federation Naturalist David Mizejewski appeared on the Ellen DeGeneres Show with wildlife ambassadors to inspire Americans to get engaged in conservation and ensure that wildlife thrive in a rapidly changing future.

More than 1 million species are endangered and facing extinction globally. In the United States one-third of species are at increased risk of extinction in the coming decades. Mizejewski highlighted this wildlife crisis and the need for all of us to get involved and take action to save wildlife.

To help deliver this message, Mizejewski brought a large boa constrictor, which he used to highlight the important ecological roles snakes play, to dispel myths about these maligned animals, and call attention to new diseases threatening snakes. He was also joined by a binturong and a zebra, both species declining in the wild due to habitat loss, and an African serval kitten that served as an example of why we should adopt homeless domesticated cats from shelters rather than trying to own exotic wild cats as pets.

“National Wildlife Federation hopes everybody out there joins our cause and gets involved protecting wildlife. It is up to all of us to get involved and save these beautiful creatures,” said Mizejewski.

The segment ended with a plug for the expanded second edition of Mizejewski’s how-to book Attracting Birds, Butterflies and Other Backyard Wildlife, which hit shelves earlier this spring. The book serves as a practical guide to natural gardening and is filled with illustrated projects, plant lists and over 200 brand new full-color photos to inspire both experienced gardeners and new enthusiasts alike. Since its original publication in 2004, the book has been a seminal part of the National Wildlife Federation’s signature Garden for Wildlife™ program. It was the inspiration for the Animal Planet series Backyard Habitat and was the recipient of the Independent Book Publishers Association’s Benjamin Franklin Award.

To book David Mizejewski for a media appearance or to speak at your event, please click here.