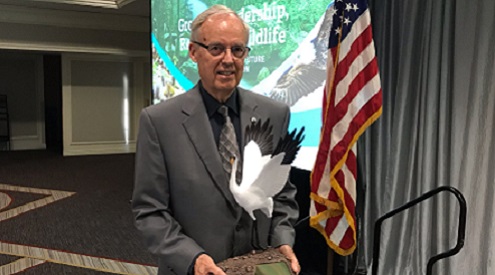 ST. LOUIS, MO  — The National Wildlife Federation honored the national conservation leadership of Clark Bullard, including his decades of service to the Federation and its Illinois affiliate, the Prairie Rivers Network.

“Clark’s dedication to the conservation of America’s natural resources, long commitment to conservation in Illinois, and contributions to Prairie Rivers Network exemplify the mission of the National Wildlife Federation and our affiliates,” said Collin O’Mara, president and CEO of the National Wildlife Federation. “His work to protect the Middle Fork of the Vermilion River, and the Sangamon River; promote energy conservation and the responsible disposal of nuclear waste; and draw attention to the issues surrounding farmland drainage systems, to name only a few of his achievements, have left a lasting legacy on the Land of Lincoln.

“Through Clark’s tireless efforts to protect land, water, and cultural resources, he has made a measurable impact on wildlife and wild places and inspired future conservationists.”

“On Earth Day 1970 millions of young activists secured passage of our bedrock environmental laws. But polluters pushed back, and America’s wildlife populations are being decimated. Today’s global youth movement aims to save the planet by changing the way humans relate to nature,” Bullard said. “It’s time for us Earth Day veterans, now retired and again free of establishment ties, to join in a ‘gray-green alliance’ to pass a new set of laws that secure a future where people and wildlife can thrive together.”

Bullard is an engineering professor at the University of Illinois who has dealt with energy and water conservation policy throughout his career. He served during the Carter Administration as Director of the Conservation and Renewable Energy Policy Office at the U.S. Department of Energy, and during the Thompson and Edgar Administrations on many Illinois task forces and commissions related to water and energy policy. He served 12 years on the board of directors of the National Wildlife Federation (vice-chair) and is currently on the board of its Illinois affiliate, Prairie Rivers Network. He has organized and led statewide citizens’ groups that, among other things, stopped a reservoir project that would have destroyed Illinois’ No. 1 river ecosystem and led the campaign for its designation as the first National Scenic River in Illinois.