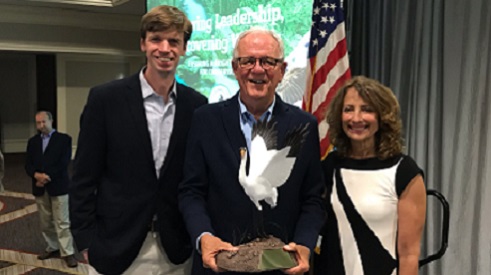 ST. LOUIS, MO  — The National Wildlife Federation has recognized Dan and Connie Burkhardt for being leading voices in the efforts to protect Missouri wildlife and habitat.

“Dan and Connie’s dedication to the conservation of America’s natural resources, long commitment to conservation in Missouri, and contributions to the Conservation Federation of Missouri exemplify the mission of the National Wildlife Federation and our affiliates,” said Collin O’Mara, president and CEO of the National Wildlife Federation. “Their work to found the Katy Land Trust and Magnificent Missouri, promote the beauty and importance of the Missouri River, and support the work of local conservation organizations has left a lasting legacy on the state and benefit for Missouri’s wildlife and wild places.”

“We believe in conservation by story-telling,” said Dan Burkhardt, founder of the Katy Land Trust. “The story we are telling is about the Missouri River Valley west of St. Louis. The last 100 miles of the Missouri River — from Hermann to its Confluence with the Mississippi — is overflowing with cultural and natural history. By engaging people in many different dimensions of the river valley, we think they will want to conserve and protect the farms, rivers, trails and parks that make up its historic landscape.”

“Over the past 10 years, Dan has published a coffee table book and authored a book for the next generation of conservationists, produced and assisted in the production of four documentaries with our local PBS station, released a CD of river music by local artists, purchased and rehabbed a general store and a mercantile, both built in 1896, and sponsored dozens of public events for the benefit of Missouri’s conservation groups,” Connie Burkhardt said. “We also spend time sharing these stories with community groups in these river towns.”

The Burkhardts founded the Katy Land Trust in 2010 and co-founded Magnificent Missouri in 2012. Both organizations work to connect Missourians to the value of the landscape along the Missouri River and the Katy Trail west of St. Louis. They have published books and magazines, saved historic buildings, created artwork, sponsored bluegrass music, created campaigns to eliminate invasive species, planted trees and hosted countless events — all to introduce non-conservationists to conservation. They have also placed a conservation easement on their 220-acre family farm in the Missouri River Valley.