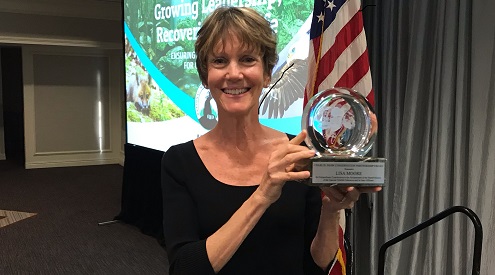 “The more I learn about the incredible work of our affiliates, the more I feel hopeful about the future of our nation’s wildlife and wild lands,” Moore said. “These folks work hard in the trenches to fight for smart policy, keep public lands accessible, ensure healthy habitats and help wildlife thrive — so spotlighting their work in the magazine is an honor. Besides, they’re a diverse bunch and a blast to hang out with, a nice plus!”

Moore, a resident of Maryland, has built a career as a magazine writer and editor, first at U.S. News & World Report, then for 14 years at National Geographic — where she headed the staff writer’s department — then as head of publishing for The Wildlife Society, where she edited The Wildlife Professional. In 2014, Moore joined the National Wildlife Federation as editorial director, and since then has gained enormous respect for the Federation’s work in helping wildlife and habitats thrive.

Thanks to the National Wildlife Federation, Moore said, she has also learned how to be a wildlife gardener — “much to the delight of the caterpillars and other critters in my messy backyard.” She’s deeply grateful for this honor, for the Federation’s support of National Wildlife magazine, and for story ideas from affiliates — “so keep ’em coming!”