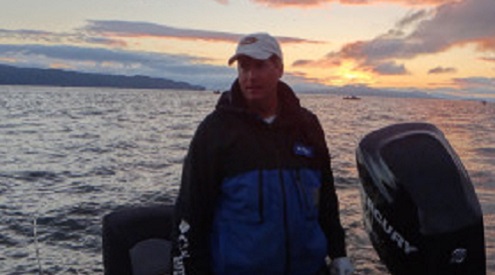 ST. LOUIS, MO  — The National Wildlife Federation honored Bob Rees, former executive director of the Association of Northwest Steelheaders, for his work in Oregon and at the national level in support of wildlife conservation.

“Bob has been an unparalleled leader in Oregon and at the national level in protecting America’s wildlife. Through his work, the Association of Northwest Steelheaders has become one of the most sought after and successful partners in conservation because of his energy, dedication, and tireless work ethic,” said Collin O’Mara, president and CEO of the National Wildlife Federation. “From Bob’s willingness to work jointly on common goals to his leadership on shaping the future of the Federation through recent strategic planning and diversity initiatives, he exemplifies the spirit of this award and the ideas at the core of our One Federation.”

“I’m humbled by this honor and will continue to exemplify the conservation ethic that Charlie and the long list of previous recipients have brought forward in our fight to save America’s wildlife,” Rees said. “The ‘One Federation’ concept embraced by the National Wildlife Federation and its affiliates is a necessary strategy to combat the wildlife crisis. It’s a model for success that gives hope to all of us so that wildlife have a future on our public lands and in our public waters.”

Bob Rees is a 6th-generation Oregonian that acquired his recessive outdoor gene from both of his grandfathers; one from Pennsylvania and one from Washington. His love of nature started early and retrieving the National Wildlife Federation animal stamps from his Dad’s garbage can was integral in launching his advocacy for all things natural.

Also a professional fishing guide of 29 years, Bob quickly came to understand industry’s role in protecting the future of our natural resources and the burden ahead for future generations of hunters and anglers.

Bob is the former executive director for the Association of Northwest Steelheaders and continues to work campaigns on the organization’s behalf. He is honored to be recognized with the 2019 Charlie Shaw award and continues to appreciate the special relationship the affiliates have with the National Wildlife Federation.