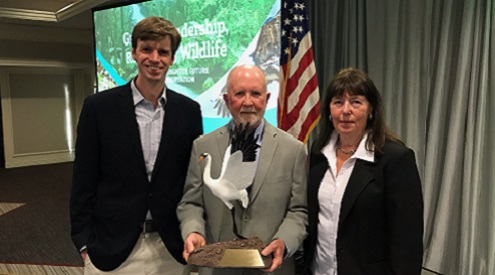 “Mike’s long history of work with young people through South Dakota Wildlife Federation’s Annual Youth Conservation Camp is truly impressive. By engaging kids in outdoor recreation and inspiring the next generation of conservationists, he has embodied the mission of the National Wildlife Federation and our affiliates,” said Collin O’Mara, president and CEO of the National Wildlife Federation. “Mike’s tireless commitment to conservation and spirit of volunteerism are truly an inspiration. We are proud to honor his efforts to preserve the natural resources of South Dakota and to inspire countless young people to join him in these critical efforts.”

“To see campers who go into wildlife related fields or just become knowledgeable about wildlife and conservation has made my 30-plus year involvement with camp a real joy,” McKernan said.

The National Conservation Affiliate Volunteer of the Year Award honors affiliate volunteers who give their time, talents, and service to support the conservation efforts of the Federation. The ceremony took place at the National Wildlife Federation’s annual meeting and 83rd anniversary celebration.