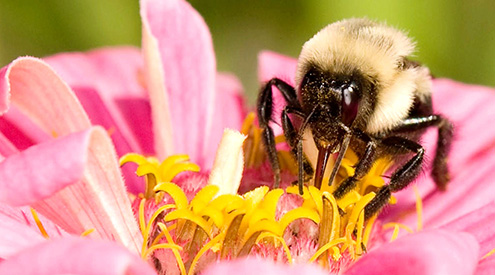 RESTON, VA — Gardeners, homeowners, businesses and conservation advocates are showing how individuals working together can support the recovery of pollinators and America’s wildlife. The National Wildlife Federation heralds these pollinator champions —participants creating Certified Wildlife Habitats®, and Schoolyard Habitats, Butterfly Heroes™ planting milkweed gardens, and communities providing Trees for Wildlife® — and urges others to join in during National Pollinator Week from June 17-23.

A recent UN biodiversity report estimates that up to 1 million animal and plant species, including pollinators as well as the plants they rely upon, are at risk of extinction in the coming decades due to human activity.

National Wildlife Federation’s Garden for Wildlife program encourages all Americans to keep pollinators in mind when gardening. A simple way of doing this is by thinking in three’s, and planting a minimum of three varieties of blooming nectar plants across three seasons: spring, summer, and fall.