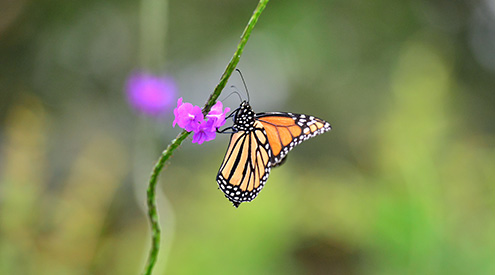 Harlingen, TEXAS — With monarch butterflies migrating south for the year, Harlingen Mayor Chris Boswell has pledged to create habitat in his community along the Lower Rio Grande Valley. Boswell’s commitment makes him the 500th mayor to sign the National Wildlife Federation’s Mayors' Monarch Pledge, committing to create habitat and engage the city’s residents to help save the declining monarch butterfly and other pollinators.

“Throughout the Central Monarch Flyway, and in the Lower Rio Grande Valley, our nation’s cities are stepping up to save the monarch butterfly through the National Wildlife Federation’s Mayors’ Monarch Pledge,” said Collin O’Mara, president and CEO of the National Wildlife Federation. “By working with leaders like Harlingen Mayor Boswell, McAllen Mayor Jim Darling and their colleagues in the Valley through the Lower Rio Grande Valley Monarch Conservation Network, we will recover imperiled monarch butterfly populations and ensure that every child has a chance to experience their majesty in their backyards and communities.”

“We are proud to join the Mayors’ Monarch Pledge network as the 500th community committed to take action to save the monarch butterfly and educate our residents on how they can have an impact in their community,” Boswell said. “We look forward to working with the other 12 cities of the Lower Rio Grande Valley that have signed the Pledge to create native habitat for monarch butterflies as well as many bird species that migrate through the Valley each year.”

“I want to encourage all of our communities to plant native species to improve habitat for monarchs and other wildlife,” said McAllen Mayor Jim Darling, the first “Monarch Champion” mayor in the Valley, committing to all 24 action items of the Mayors’ Monarch Pledge. “Each year we are fortunate to experience monarch migration as they journey to and from their wintering grounds in Mexico. By taking the pledge, McAllen and our neighbors can not only play an important role in conserving the monarch, but also benefit from the natural, diverse beauty of our region.”

Through the National Wildlife Federation’s Mayors' Monarch Pledge, cities and municipalities commit to create habitat and educate citizens on how to make a difference at home or in their community. Mayors who take the pledge commit to at least three of 25 action items to help save the monarch butterfly. These actions include creating a monarch-friendly garden at city hall, converting abandoned lots to monarch habitat, and changing mowing schedules to allow milkweed to grow unimpeded.

In 2014, the eastern monarch population declined by more than 90 percent, occupying less than one hectare of the overwintering grounds. This decline is the result of numerous threats, particularly the loss of habitat due to cropland conversion, urban development, and agricultural practices. Degradation of the overwintering habitat in Mexico and California has also had a negative impact on the species. On March 21, 2020, the 13 Mayors of the Lower Rio Grande Valley who committed to the Pledge will come together for the National Wildlife Federation’s Mayors’ Monarch Summit, to be held at Quinta Mazatlán during the Monarch Festival. At the Summit, the mayors will discuss and approve a collaborative plan of action to help protect the monarch butterfly and its native habitats.

The National Wildlife Federation’s Urban Monarch Outreach work in the state of Texas has been possible thanks to the generous funding of the National Fish and Wildlife Foundation through the Monarch Butterfly and Pollinators Conservation Fund.

Through the National Wildlife Federation’s Urban Wildlife Programs, cities, counties and towns across the United States are helping local wildlife by restoring and reconnecting habitat in urban and suburban areas. For more information about the Mayors Monarch Pledge, please go to: NWF.org/MayorsMonarchPledge.