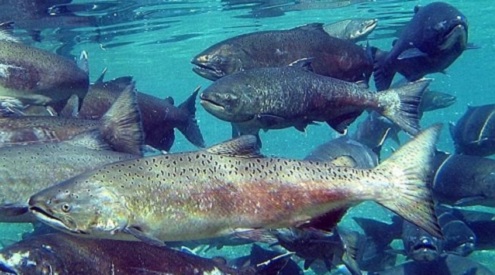 “At this critical point, when what were the world’s most abundant salmon runs are nearing extinction, what we need are new solutions, not a repackaging of previous strategies that clearly haven’t, and won’t, deliver the recovery of salmon,” said Tom France, the National Wildlife Federation’s regional director for the Pacific Northwest. “What the DEIS proposes simply does not align with what Northwest communities need, which is a healthy, intact river ecosystem that works for people, fish and wildlife alike.

“The DEIS scope is limited and the process is therefore wholly inadequate to restore abundant, harvestable salmon and steelhead populations in the Columbia and Snake Rivers. We need broader conversations throughout the region and in Congress to develop and deliver real solutions for farmers, fisherman, ratepayers and residents alike."

The DEIS was written by U.S. Army Corps of Engineers, the federal agency that is responsible for managing the four lower Snake River dams. Since the final construction of the dams in the 1970s, 13 species of salmon and steelhead have been listed threatened according to the Endangered Species Act. Despite decades of habitat recovery attempts at the cost of more than $17 billion, 2019 salmon returns remained perilously low, forcing emergency fishing closures — and economic devastation — in Washington and Idaho fishing communities.

"It is clear that the status quo is not working for Idaho and communities across the state that have relied on robust salmon and steelhead runs for generations and are now faced with constant uncertainty,” said Brian Brooks, executive director of the Idaho Wildlife Federation. "What these towns that make up the heart of our state need is not just more of the same. To make Idaho a desirable place for future generations, and a place where anglers can continue to watch the flash of silver from a steelhead on the end of their line on the mighty Clearwater or the wild Salmon River, we need to see new ideas and bold action from our elected officials."

The DEIS was prepared after a court rejected a 2016 plan for salmon recovery — the fifth to be invalidated by three judges in over two decades.

“This DEIS falls far short of the win-win solutions we need now, as Snake River salmon and steelhead populations are plummeting and fishing communities are hurting,” said Chris Hager, executive director for the Association of Northwest Steelheaders. “We need comprehensive solutions to recover endangered fish runs and the recreational and commercial fishing opportunities and the economic drivers associated with both. With collaboration across communities, strong leadership and smart investments, restoring abundant, harvestable salmon populations is within our reach."