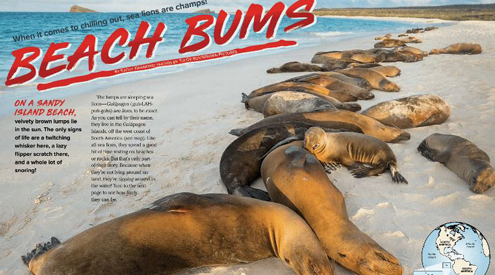 Washington, D.C. — The National Wildlife Federation and Ranger Rick magazine are pleased to announce Tui De Roy as the winner of the 2019 Ranger Rick Photographer of the Year Award. Each year this award is given to the professional photographer whose work in Ranger Rick has most effectively advanced the magazine’s mission: to inspire a love and understanding of wildlife and the natural world in young children.

De Roy’s passion for wildlife and the outdoors began when she was a child and her artist parents moved the family from Belgium to Ecuador’s Galapagos Islands. There, De Roy was homeschooled with a focus on the extraordinary nature around her. As she grew older, she spent an increasing amount of time around the scientists and scholars studying the islands, ultimately going on to become the first naturalist guide in the Galapagos.

“Tui’s pictures and stories from her travels around the world have given millions of readers an intimate look at animals ranging from penguins to rhinos,” said Susan McElhinney, Ranger Rick’s photo editor. “Be it on the beach or under the surf, her work is a window to the guarded lives of these animals. What differentiates Tui’s photography is a passion rooted in her internationally recognized commitment to environmental conservation.”

Throughout her career, De Roy has photographed and written over 20 books, including large photography books, guidebooks, children’s books, and a landmark anthology of her work in the Galapagos. Her “Beach Bums” story about Galapagos sea lions, published in the August 2019 issue of Ranger Rick, follows the marine mammals above and below water.

In addition to her writing and photography, she leads tours, speaks on conservation globally, and sits on the board of the Charles Darwin Institute.

Ranger Rick Photographer of the Year aims to encourage excellence in photography and to advance visual literacy in the field of natural history. It is through photo stories like De Roy’s that Ranger Rick readers are able to immerse themselves in the natural world and develop a passion for wildlife that, for many, continues throughout their lifetimes.

Along with the distinction of winning the award, De Roy will receive a $1,000 prize and an announcement in the June 2020 issue of Ranger Rick.