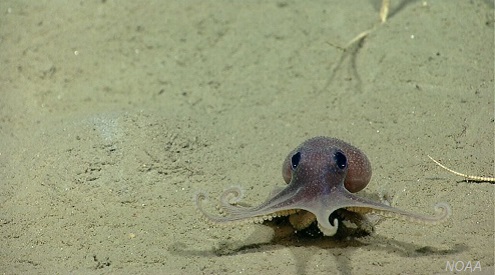 WASHINGTON, D.C. — The Trump Administration’s decision to weaken protections for the Northeast Canyons and Seamounts Marine National Monument, which is critical habitat for numerous marine species and seabirds, is an unacceptable and illegal assault on America’s wildlife and global biodiversity. The National Wildlife Federation, Environmental League of Massachusetts, Environment Council of Rhode Island, and Audubon Society of Rhode Island pledged to fight the president’s decision and to restore protections for the national monument and the wildlife that call it home.

“The Northeast Canyons and Seamounts Marine National Monument is a truly extraordinary and special place, teeming with whales, dolphins, sharks, seabirds and other aquatic species. This unlawful order to remove critical protections for the only marine national monument in the Atlantic will push numerous endangered species closer to the brink,” said Collin O’Mara, president and CEO of the National Wildlife Federation. “Just as we are committed to reversing the illegal assaults on western national monuments, so too will we work with our partners to reverse this dreadful decision.”

“Rolling back protections for the Northeast Canyons and Seamounts Marine National Monument is part of the Trump administration’s continued assault on environmental protections," Elizabeth Turnbull Henry, president of the Environmental League of Massachusetts. "The President’s announcement directly contradicts the purpose of marine monuments which is to protect irreplaceable ocean habitats from extractive industries. His messaging pitting the environment and the economy against each other is both misleading and dangerous. A healthy environment and strong economy are mutually reinforcing. This rollback would set a precedent potentially allowing extractive practices in other protected areas.”

“The Audubon Society of Rhode Island and the Environment Council of Rhode Island strongly oppose opening the Northeast Canyons and Seamounts Marine National Monument to commercial fishing," said Meg Kerr, senior director of policy at the Audubon Society of Rhode Island. "The purpose of the marine monument is to provide protection for productive habitat on the edge of Georges Bank where marine wildlife can thrive, free from the impacts of commercial fishing. The area provides habitat for endangered and rare species including over 54 special of corals and the North Atlantic Right Whales. The monument is the only Marine National Monument in the Atlantic Ocean and critical to protection of biodiversity along the East Coast.”