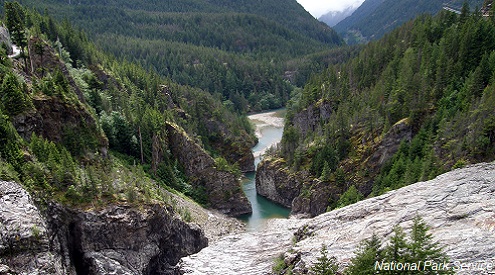 RESTON, Va. — Congress should hold hearings on the impacts of British Columbian mining operations on U.S. waterways, wildlife, and communities and pressure Canadian officials to strengthen environmental protections, the 52 state and territorial affiliates of the National Wildlife Federation unanimously agreed today through a new resolution.

“The National Wildlife Federation … calls upon the congressional delegations of Alaska, Washington, Idaho, and Montana to demand that the Government of British Columbia, as the jurisdiction where mines in the transboundary watersheds are regulated, to act immediately to protect the transboundary watersheds and all who depend on it from the impacts of mining,” the resolution reads, in part.

Existing and potential mining operation in the headwaters of dozens of rivers and streams that flow from Canada into Alaska, Idaho, Montana and Washington pose a serious threat to the communities and wildlife that depend on these waterways. The salmon-rich rivers that flow through Southeast Alaska are particularly impacted.

Weak regulations in British Columbia — especially substantially lower bonding requirements than those in Alaska, Washington and other U.S. states — would leave taxpayers and communities downriver unable to redress or remediate the financial and environmental issues that could arise from mining discharges and disasters.

“We in Washington regard British Columbia as a great neighbor with which we share a great love of nature and prosperous commerce,” said Mitch Friedman, executive director of Seattle-based Conservation Northwest. “But they are anything but neighborly in the way they put our rivers, communities, and fish and wildlife at risk of catastrophe from breached tailings dams.”

"The impacts from British Columbian mining in the transboundary watersheds shared by Alaska, British Columbia, and sovereign Indigenous governments put the health, water, and access to food of all downstream communities at risk," said Meredith Trainor, executive director of the Southeast Alaska Conservation Council, based in Juneau. "It is imperative that the Premier of British Columbia include Indigenous governments and our Southeast Alaskan communities across the border in the United States in protections he has extended under his Bill 41, the Declaration on the Rights of Indigenous Peoples Act. We are calling on Congress to hold public hearings to pressure British Columbia to be a better neighbor to our Alaskan communities."

“We applaud the National Wildlife Federation and its State Affiliate family for emphasizing the inclusion of impacted sovereign governments and Indigenous communities in its Resolution,” said Frederick Olsen Jr, executive director of the Southeast Indigenous Transboundary Commission, a consortium of 15 sovereign Tribal nations located in Southeast Alaska. “We know there can be no real implementation of UNDRIP in British Columbia without including Alaska, Idaho, Montana, and Washington Tribes, and BC First Nations. Alaskan Tribes have not given consent for any major projects in BC."

The National Wildlife Federation’s 52 state and territorial affiliates adopted this resolution at the organization’s 84th Annual Meeting. The proceedings and discussion on this and other resolutions, which guide the Federation’s work, were held virtually due to the COVID-19 crisis.