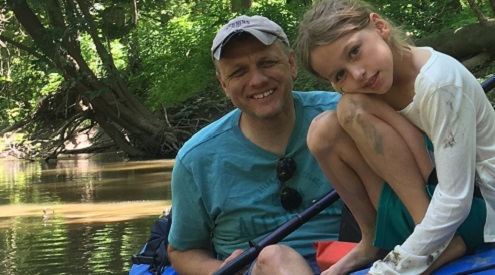 RESTON, Va. — Frank Szollosi, who served for over a decade on climate and water policy campaigns for both the National Wildlife Federation’s Great Lakes Regional Center and Washington, D.C.-based National Advocacy Center, is being honored for his passion and commitment to strengthening the Federation’s state affiliate network. In June 2020, he assumed the role of Executive Director of Montana Wildlife Federation.

“Everyone who meets Frank is immediately captivated by his energy and enthusiasm for collaborative conservation,” said Collin O’Mara, president and CEO of the National Wildlife Federation. “Frank shares the same passionate drive to advance wildlife conservation wins at the state and federal level that Charlie Shaw himself embodied. His thoughtfulness and transparency in all his interactions with state affiliates in the Great Lakes region and across the country is what makes him such an effective and inspiring leader.”

“It’s been the honor of my life to work with so many friends and colleagues within National Wildlife Federation and among our state affiliate partners,” Szollosi said. “I’m proud that our Federation serves as a unifying voice in an era of bitter political division, and continues to take deliberate steps to support equal justice and include all people in the fight for our public lands, clean water and clean air, the restoration of wildlife and habitat, the preservation of hunting and fishing resources, and to take on the mortal, twin threats of biodiversity loss and climate change.”

The Charlie Shaw Conservation Partnership Award honors individuals who have demonstrated a true appreciation for the value and potential of the National Wildlife Federation-affiliate partnership. Szollosi was honored during the National Wildlife Federation’s annual meeting and 84th anniversary celebration, which was held for the first time as a virtual event this year.

Highlights of Frank’s work in the Great Lakes include dropping his kayak into Michigan’s Kalamazoo River to document wildlife and habitat impacts in the immediate aftermath of the 2010 oil pipeline disaster, leading the National Wildlife Federation’s response to the Toledo Water Crisis in 2014 and successfully advocating for federal Clean Water Act accountability for nutrient reduction, and hiring and managing a diverse array of field organizers in states across the Midwest to push for stronger climate action, defense of public lands and critical state and federal conservation legislation. A relentless advocate for including affiliates in all aspects of the Federation’s work — Szollosi is deeply committed to National Wildlife Federation’s collaborative efforts to address equity and justice.