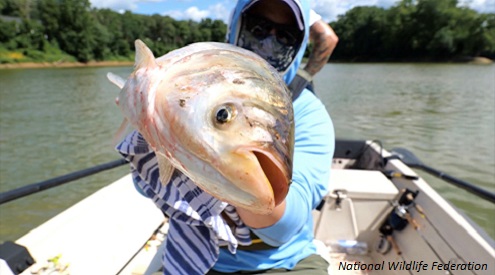 National Wildlife Federation’s “Against the Current” shows the threat of Asian carp to the Great Lakes and their current impacts in Southern and Midwestern waters.

ANN ARBOR, Mich. — A new film released today explores the national scope of the problems caused by invasive Asian carp. The film focuses on the impact Asian carp have on the values and economies they threaten in the Great Lakes and the impacts they’re currently having in Southern and Midwestern waters.  Furthermore, it highlights what’s needed to stop them. Against the Current, released by the National Wildlife Federation Great Lakes Regional Center, features diverse viewpoints representing scientific, tribal, business, tourism, fishing, outdoor recreation, and conservation communities from northern Michigan to Tennessee.

“We deliberately explored the often underpublicized – but extremely important – values at risk from invasive Asian carp across a wide swath of the country,” said Drew YoungeDyke, director of conservation partnerships for the National Wildlife Federation Great Lakes Regional Center and executive producer of the film. “We often hear of potential impacts to the Great Lakes sport fishery but we also wanted to show the threat to connected inland waters, tribal fisheries, and the outdoor recreation and tourism economies. We hear frustration that nothing is being done about Asian carp, so we wanted to show some of the projects already completed, as well as the things that still need to be done to stop Asian carp. We wanted to show the impact they’re already having in places that we don’t often hear about like inland rivers in Indiana, and in ways we don’t often hear about like property values and even duck hunting in Tennessee. The film shows that Asian carp aren’t just a Great Lakes fishing issue, they’re a national issue affecting our waters, our economies, and our way of life.”

Against the Current can be viewed on YouTube, Vimeo, and on the National Wildlife Federation Great Lakes Regional Center’s Facebook page.