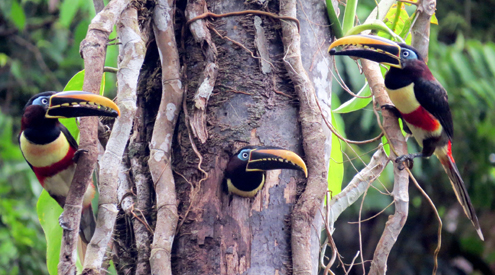 'For the First Time, We Were Able to Isolate the Brazilian Soy Moratorium's Unique Contribution to Forest Conservation'

WASHINGTON, D.C. — A zero-deforestation agreement for soy has resulted in saving nearly 4.5 million acres of the Brazilian Amazon — an area larger than the state of Hawaii. A recent study quantified the total area of wildlife habitat that the Amazon Soy Moratorium protected over its first decade without hindering the growth of soybeans in the region.

The Brazilian Soy Moratorium was the result of collaboration between industry and civil society to stop rampant deforestation in the Brazilian Amazon due to the expansion of soybean farming. The moratorium required traders to avoid purchasing soy from newly deforested areas. While the success of the moratorium as a long-term agreement that did not hinder the Amazon soybean industry has been widely documented, this paper, Brazil’s Amazon Soy Moratorium Reduced Deforestation, led by Robert Heilmayr, assistant professor at University of California, Santa Barbara, is the first to rigorously evaluate and quantify the role that the moratorium had in reducing deforestation in the Brazilian Amazon.

“Our study is important because, for the first time, we were able to isolate the Brazilian Soy Moratorium’s unique contribution to forest conservation from other factors and policies,” said Dr. Holly Gibbs, a co-author on the paper and an associate professor of geography and environmental studies at the University of Wisconsin-Madison. “Ultimately, the Moratorium has demonstrated that soy expansion is possible without deforestation. Our study confirms the importance of continued investment in private sector leadership to help address commodity-driven deforestation across the tropics.”

“The National Wildlife Federation has been working to support initiatives to reduce the impact of expanding agriculture in South America on forests and is proud to support a publication that showcases how effective a sectoral agreement can be for reducing deforestation in critical biomes,” said Nathalie Walker, director of tropical forests and agriculture at the National Wildlife Federation. “This groundbreaking study shows the lasting impact from addressing just one driver of deforestation. Of all the many private sector initiatives around the world aiming to reduce deforestation pressure from agricultural products, this is the first initiative to have been found to have a large and sustained conservation benefit.”

Below is a list of key findings from the paper:

*These materials are distributed by the National Wildlife Federation on behalf of its foreign principal Norad. Additional information is on file with the FARA Registration Unit of the Department of Justice, Washington, D.C.