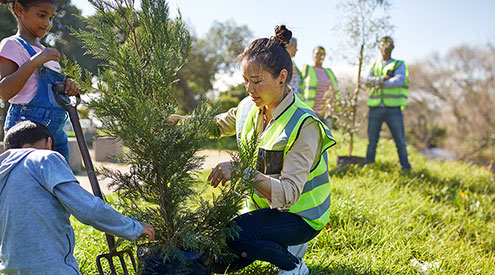 WASHINGTON, D.C. — The National Wildlife Federation hosted the first in a series of roundtables with conservation and environmental justice leaders focused on racial justice and economic recovery. The “21st Century Civilian Conservation Corps, Climate Economy, and Justice” roundtable gathered 30 Black, Indigenous, and Latinx leaders representing national and community-based organizations to discuss priorities and recommendations that ensure communities of color benefit from the development and implementation of a 21st century Civilian Conservation Corps.

“Frontline communities and communities of color have only seen their health, environmental and economic challenges exacerbated by the current COVID-19 unemployment crisis,” said Mustafa Santiago Ali, vice president of environmental justice, climate, and community revitalization for the National Wildlife Federation. “Reviving the Civilian Conservation Corps would be a crucial step toward confronting the threats and racial inequities faced by these communities today, and putting thousands of Americans back to work restoring the nation’s natural resources and recovering wildlife populations.”

“Modernizing and implementing the Civilian Conservation Corps has the potential to serve as a vital tool to address the unemployment crisis and our nation’s racial and environmental injustices,” said Simone Lightfoot, national director of urban initiatives and environmental justice for the National Wildlife Federation. “By intentionally centering the priorities and recommendations of communities of color, we can ensure that these recovery efforts don’t perpetuate historical disparities.”

"The NAACP looks forward to continue to work in partnership as we move an opportunity for people to be gainfully employed, create a new generation of conservationists, and to protect our land,” said Derrick Johnson, president of the National Association for the Advancement of Colored People (NAACP).

“Because the health economic consequences of the pandemic have fallen disproportionately on communities of color, our approach to healing and recovery must explicitly target those communities,” National Urban League president and CEO Marc H. Morial said. “This effort to transform and revive the Civilian Conservation Corps is exactly the kind of initiative that will help us build a more inclusive and equitable economy for the future.”

“We have an opportunity and responsibility to ensure that job creation initiatives, like the 21st Century Civilian Conservation Corps, have equitable benefits for communities across our nation,” said Camilla Simon, executive director of Hispanics Enjoying Camping, Hunting, and the Outdoors (HECHO). “The perspectives shared during this convening are essential to strengthen and ground the CCC proposal in Black, Latinx, and Indigenous community knowledge and experience.”

"The Civilian Conservation Corps is an opportunity for federal dollars to come to communities like Flint and fund municipal forestry and park departments,” said Nayyirah Shariff, director of Flint Rising. “We also have a chance to create climate resilient, self-sufficient urban centers by creating new green spaces using native plants and grasses, wetland reclamation, and training Black, Brown, and Indigenous people in careers that will reframe our relationship with the land."