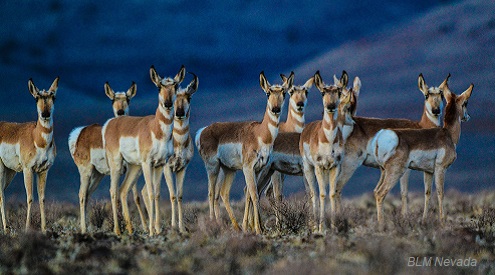 DENVER, COLO. — The National Wildlife Federation welcomed the End Speculative Oil and Gas Leasing Act of 2021, sponsored by Senator Catherine Cortez Masto (D-Nev.), which would stop oil and gas speculators from leasing public lands that have little or no potential for energy development.

“For too long, energy speculators have taken advantage of an archaic leasing system by paying embarrassingly low prices to lease land that has virtually no potential to produce oil and gas,” said David Willms, senior director of Western Wildlife and Conservation at the National Wildlife Federation. “Why should the government waste time and money administering leases that won’t bring any financial return, and may actually cost taxpayers money? This epitomizes government waste and inefficiency. Senator Cortez Masto’s bill would put a stop to this needless practice.”

“There is no reason why oil and gas companies should dictate how our public lands are managed, especially when those lands have no potential for oil and gas development. Senator Cortez Masto’s bill is a long-overdue fix that would put an end to the harmful practice of speculative leasing and would modernize the leasing system so it works once again for the communities and wildlife that depend on our nation’s lands,” said Russell Kuhlman, executive director of the Nevada Wildlife Federation.

Millions of acres of public land are leased each year that have almost no potential for energy development.  Sometimes those leases are sold for as little as $1.50 an acre. Local communities depend on the balanced, multiple use of public lands for hunting, fishing, camping and many other outdoor recreation opportunities.  Passage of this bill would allow the Bureau of Land Management to manage public lands for all Americans and not just the oil and gas industry.