NWF's president shares his outrage after the Exxon Valdez spill 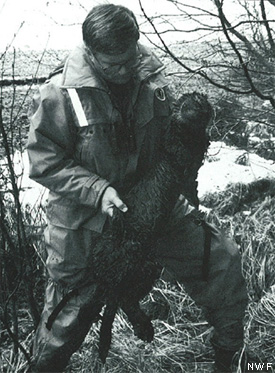 CORDOVA, ALASKA, APRIL 10, 1989—As I write this, I am in the town near the spot where the supertanker Exxon Valdez ran aground on the rocky shoals of Prince William Sound on March 24, bleeding crude oil into one of the most pristine and delicate ecosystems in the world. I wish I could bring you some good news about the recovery of these polluted waters and oil-covered shorelines, but unfortunately, the problems have only begun.

Rage is the best word I can think of to describe what I feel as I see countless miles of oil-soaked beaches, dead birds and sea otters. One sea otter had struggled a hundred yards away from the beach and died in a pool of bloody, oil-filled excrement, its lips frozen in a curl of agony. Thick crude oil encircles dozens of islands with a wide belt of slim, trapping wild animals that pathetically try to break free. Most of them don’t make it.

It is the worst environmental disaster in American history. The futures of thousands of local residents who are dependent on the natural resources of the sound for their livelihoods have been seriously jeopardized. In our lifetimes, Prince William Sound will never again be what it was on March 23, 1989.

We have to keep asking "why" and demanding answers to some pressing questions: Why did the oil industry consortium, operating out of the Port of Valdez, cut back on its oil spill clean-up resources in recent years? Why did Exxon take so long to begin to clean-up operations?

We cannot give adequate solace to the grief and despair of the people of Prince William Sound. The financial losses of those families whose livelihoods depend on healthy sport and commercial fisheries or the incredible scenic beauty can never be completely compensated. Because of incompetence and corporate greed, their lives have been changed forever.

But we can demand that Exxon be held accountable. What Exxon has done—and failed to do—in this case is outrageous. Exxon corporate officials must be held responsible for the Prince William Sound cleanup and for assuring future oil tanker safety and crew competency. They must return Prince William Sound to its pristine condition—no matter how long it takes or how much it costs.

We cannot allow Exxon to shift the blame for this disaster to the ship’s crew or captain, or to the State of Alaska or the Coast Guard. Exxon's corporate decisions and policies could have prevented or at least lessened the catastrophe in Prince William Sound by assuring, among other things, that a captain with a reported history of drinking would not be in charge of a supertanker, that crews would be routinely tested and their backgrounds checked periodically, that safety measures and equipment were adequate, and that spill contingency plans were well developed, tested and shown to be as effective as promised.

It is absolutely essential that we recommit to assuring better safeguards against oil spills. Single-hulled supertankers like the Exxon Valdez that carry a million barrels of oil must be prohibited from operating in the United States territorial waters. The risks to the marine environment are simply not worth whatever the economic benefits maybe to big oil companies. The rules for vessel crews, navigational controls and tanker safety obviously must be strengthened and rigorously enforced. Contingency plans for spills appear to be virtually worthless. They must now be reviewed carefully, amended and routinely tested by government officials in unannounced drills.

In addition, Exxon and the Alyeska Pipeline Supply Company should be required to pay for a new, joint federal-state government Regional Response Team, to be located in Valdez, with all of the equipment and staff necessary to respond immediately and effectively to an oil spill of any magnitude.

The National Wildlife Federation also recommends the creation of a strike force of environmental and safety experts with broad authority and expertise to investigate all major chemical and oil accidents.

So far, Exxon's response has been both pathetic and self-serving. The company launched a $1.8 million public relations campaign to try to save its image with more than 100 newspaper ads across the nation carrying an "apology to the American people." But I would like to know just how sorry Exxon really is.

Since 1977, when the Trans-Alaska oil pipeline opened, Exxon has reported profits of $49 billion. Is Exxon sorry enough to pay for full damages from the spill? And by that I mean more than just the federal government's "market values" of $15.00 apiece for seals and $7.88 apiece for puffins, pelicans, loons and cormorants. These rules are absurd. And the National Wildlife Federation has gone to court to get them changed.

Is Exxon sorry enough to establish an independently administered fund to offer zero-interest loans with no strings attached to fishermen and other Alaskans who may lose their livelihoods as a result of the spill?

Is Exxon sorry enough to establish an independent multi-billion-dollar Prince William Sound trust fund to ensure that the environment is restored, that the economic livelihood of fishing communities is maintained and that the young people of the region are guaranteed scholarships for job training or college education?

Is Exxon sorry enough to donate at least $150 million immediately, with no strings attached, to permit independent scientific assessment of damages and begin local clean-up actions where Exxon is not acting? Just how sorry is Exxon?

Of course, part of the problem at Prince William Sound can be traced back to Washington, D.C. Congress, which approved the Valdez oil terminal, must share some of the responsibility for this terrible mishap, as must the government agencies that failed to establish or enforce adequate vessel safety requirements or to assure sufficient preparation for cleanup. Congress should schedule field hearings as soon as possible in places like Cordova that are totally dependent on the sound for their livelihood. And President Bush should establish immediately an independent White House commission on the Prince William Sound oil disaster.

Finally, it is now time to update and streamline the current legal patchwork of oil spill legislation which has been languishing in Congress. And it is time to establish a National Energy Policy. The horrendous Exxon Valdez oil tragedy, mounting evidence that the worldwide warming phenomenon is real and here to stay, and the continuing problems of unhealthful air should be reasons enough to establish such a policy. Our official National Energy Policy to date, however, has been to bury our heads in the sand while we continue to be the world's worst energy wasters. Ultimately, we all must recognize that there are consequences of our unyielding demand for cheap oil. We cannot disregard the environmental, geopolitical and other impacts of this demand simply because today our gas tanks are full and lines at the pumps are short.

We should establish a National Energy Policy to urgently pursue energy conservation and renewable sources of energy. Until we have decided where our own energy supertanker is headed, we should not commit ourselves to a treacherous course of drilling in the Arctic National Wildlife Refuge and Alaska's Bristol Bay. A relatively short "fix" of oil is simply not worth despoilation of the wilderness and wildlife resources.

No, we do not accept Exxon's apology. But Exxon is not the only one on trial in the aftermath of this tragic error. We are all on trial. And this is not a misdemeanor. It is an environmental felony. If we continue down this destructive path, guzzling gas and ignoring the need for a National Energy Policy, the penalty will be far greater than a fine or jail. The penalty will be enormous and irreversible damage to our planet.