Making a Habit of Habitat 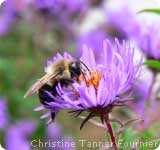 If you were to tell Today show weatherman Willard Scott that gardening is for the birds, he would certainly agree. And, speaking from experience, he might add that gardening is also for butterflies, frogs and coyotes.

For decades, Scott and his wife, Mary, have hosted a wide range of wildlife on their 15-acre farm near Middleburg, Virginia. Pointing to the fragrant honey suckle, tall trees and fencerows overflowing with fruit and flowers on his property, Scott says, "We made it a point not to cut anything down. Even in the fields, we left the clumps and clusters of native plants in place. The coveys of quails and doves love it." A half-acre pond adjoining the property draws frogs, ducks, great blue herons and geese. A few years back, even a bald eagle briefly took up residence next to the pond.

As the Scotts have discovered, ecosystems on a small scale can thrive if given a chance. The couple is not alone. For 20 years, the National Wildlife Federation's Backyard Wildlife Habitat Program has promoted that notion. In two decades, the program has awarded more than 11,650 homes, schools and businesses with certificates of achievement. Last year, the Scotts' farm joined that list-along with the habitat on the grounds of the NBC Washington, D.C., bureau, where Scott is apt to encourage camera operators to film birds singing in the trees. He has an ally in production manager Lessandra MacHamer, who has her own certified habitat at home.

The goal of the NWF program, says backyard habitat manager Craig Tufts, has been "to show people they could make the difference between life or death for wildlife in their own backyards, at work or in school." How? With food, water, cover and places for animals to raise young-and the more of these elements from natural sources, the better.

Anyone can start attracting birds with the basics, such as a birdbath and a tubular bird feeder filled with black-oil sunflower seeds. But even better are shrubs, trees and flowers that yield nuts, berries, seeds and nectar throughout the year-and also attract an ecosystem's worth of amphibians, mammals and insects. "And we want people to cut down on pesticides," says Tufts. "They're incompatible with butterflies and beneficial insects and are often unnecessary." The thousands of certified habitats range from the simple to the exotic. Here are nine case histories:

A stone's throw from the Potomac River, in a tiny suburb of Washington, D.C., Holly and Osamu Shimizu have turned their quarter-acre lot into an exquisite garden. From the tall evergreens and swaying ornamental grasses to the ivy and impatiens that hug the ground, this garden is alive with color, fragrance and movement.

Inside the front gate, an array of herbs and ornamental shrubs enclose the only lawn-a small patch of turfgrass about the size of two bowling lanes. To the right, birds splash in a tiered Italian fountain, shaded by a tree. The backyard is dominated by another water feature-a rock-lined stream meandering to the top of a waterfall and cascading into a pool below-all painstakingly designed and hand-built by the couple.

Its lush, healthy appearance notwithstanding, this garden thrives with almost no supplemental water, fertilizer or back-breaking weeding-and no chemical pesticides. "My plants have to make it on their own," says Holly, who is the assistant executive director of the U.S. Botanic Garden. "I don't have the time or interest to baby them. The secret is healthy soil with lots of organic matter." Mexican sunflowers ("blooms a lot," she says) attract butterflies. Herbs like dill, fennel, basil, thyme and rosemary help ward off pests.

Even on 48th Street in the middle of Manhattan, horticulturist Phil Tietz grows plants that attract two types of beneficial insects to his plot in the Clinton Community Garden, owned by the city. Flowers with a lot of pollen (such as cosmos and asters) attract lacewings and praying mantises. And umbellifers like Queen Anne's lace attract parasitic wasps that help control pests. During the work day, Tietz turns his attention to other city gardens as assistant director of the Green Guerillas, a community action gardening group comprised mostly of volunteers.

Among the many gardens planted by the Green Guerillas is the 10,000th habitat certified by the National Wildlife Federation: community garden "6 and B" on Manhattan's lower east side. It boasts a 4-foot birdbath made of stone, cement and tile; a clover meadow; and belfries and towers that are home to dozens of bats.

In his turtle and koi pond, a sand filter "keeps water from getting polluted, keeps algae down and is good for aquatic life," he explains. Brands added rocks and platforms so his turtles and butterflies could soak up California rays. To make the most of his supplemental watering, he installed a drip-irrigation and fertilization system.

Martha Nobel, an advocate for senior citizens, calls herself a self-taught "frog hahitateer." In her Rockland, Massachusetts, backyard, she says she has taught frogs to catch worms. "When their sides look caved in because there aren't enough bugs," she explains, "I dig up earthworms and pitch them into the pool. The frogs stand there and wait for them."

With 13 ponds, Nobel has tested frog preferences. She suggests, "In addition to water plants (water lilies, water hyacinths and cabomba), include rocks and logs-places for them to sit that are close to water so they can jump back in if they sense danger. They need sunlight and shadow, so I've made bridges and added tall plants that dangle into the water." As for ambience, she says, "Frogs adore Mexican mariachi music."

Fifteen years ago, retired concert singer Maxine Lee of St. Petersburg, Florida, saved plants that were in the path of highway bulldozers. "I didn't want them to destroy the native wildflowers, so I went out with a hand trowel and bucket and dug up blazing star, evening primrose and goldenrod." Most are still thriving in her yard, where her habitat, certified in 1973, has evolved "from a sunny location with tiny blooming wild flowers to a glorious shade garden that rabbits, woodpeckers, quails and an assortment of other birds call home."

Before Brent Schindewolf, an Illinois elementary school principal, started his home habitat, he recalls, "I had only five trees and two bushes." But filling out his application for an NWF certificate was no snap. "I didn't want to answer 'No' to any of the questions," he recalls. "So, if it asked,` Do you provide water by burying a children's pool and landscaping around it?' I decided I better do it." That took time. "That's why I'm habitat #95 instead of #5." He has since created habitats at home and at two schools. To avoid pesticides, Schindewolf replaced most of his lawn with a wild-flower meadow that attracts deer, raccoons, opossums and foxes.

At the Smoke Rise Elementary School in Stone Mountain, Georgia, "We turned a little roadside trash area into a spectacular garden and urban forest using grant money and merchandise donated by local businesses," says Jerry McCollum, president of the Georgia Wildlife Federation, whose group has certified more than 50 school habitats. "We redirected lawn-mowing money to other uses." His favorite benefits are field trips "without travel time or expense," he says. "All teachers have to do is walk outside with their students and hold classes in science, art, math or even home economics."

Like many habitat enthusiasts, American Bat Conservation Society co-founder Heidi Hughes knows that bat droppings (guano) make excellent plant fertilizer. The bats, which also help control mosquitoes and other insect pests, are sought-after guests at many habitats. Man-made bat houses have so far had limited success attracting bats in North America. So what does Hughes do? In her Rockville, Maryland, yard, she "eliminated the negatives-cats and pesticides-and added three ponds so bats could fly over at night with their mouths open and get a drink."

Inviting wildlife to your land is not without its perils. Once again television, this time of the late-night variety, has been instructive. Last year, while on the air, talk-show host David Letterman phoned his mother to inquire about "those nasty blue jays" that he suspected were tormenting other birds in her Indiana yard.

His mother, Dorothy, whose habitat was recently certified by the Federation, dismissed the blue jays as nothing more than an inconvenience. But she conceded later in an interview, "They can be aggressive." And she recalled an incident that likely prompted her son's call. "Years ago, when my dad, David's grandfather, was coming into the house, a blue jay, living in a tree by the back door, swooped down and actually drew blood on my father's head."

Then there is the nest of hornets in a corner of the Shimizu's yard outside Washington, D.C. "My children know not to bother the nest," says Holly Shimizu. "I've taught them to be cautious, but I don't want them to be afraid of wildlife." And she probably speaks for all backyard-habitat enthusiasts-even the Letterman family-when she adds, "We don't have to go to the zoo every week. Wildlife comes to us."