The American peregrine falcon's numbers have increased dramatically in the past two decades; should the bird be removed from the Endangered Species List? 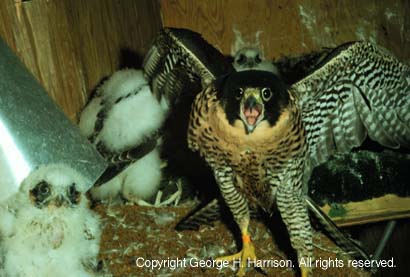 On a blustery afternoon this past May at Brigantine marsh, part of the Edwin B. Forsythe National Wildlife Refuge on the New Jersey coast, a bird-watcher cruising the wildlife drive in a red Blazer stopped alongside a bird-watcher peering through a spotting scope and asked: "Got anything out there?"

Bird-watcher with scope: "There's a peregrine on the tower."

Bird-watcher in car: "A peregrine on the tower? Thank you." And he drove on.

How times have changed! Thirty years ago, the noble hawk that the British nature writer J.A. Baker vividly described as a "crossbow flinging through the sky" seemed lost--not only in North America but in Europe and other parts of a world blighted by organochlorine pesticides, DDT in particular. "If you saw a peregrine, you called all your friends," remembers Robert Mesta, an endangered species biologist with the U.S. Fish and Wildlife Service in Ventura, California. "Now," he says with a measure of awe, "you see them everywhere."

To cite some numbers, in 1975 an intense search of 557 historic breeding sites in the 48 contiguous states and southern Canada turned up just 62 pairs of peregrines. Only 8 of 100 known eyries in California were in use, and no peregrine had been seen on a cliff east of the Great Plains since 1970, when a lonely male in Vermont scanned the skies in vain for a mate.

While some of the falcons died directly from eating contaminated prey in the decades after World War II, when DDT was considered the magic potion for insect pests in yards, farms and forests, the greater problem was shell thinning that caused most of the birds' eggs to be crushed during incubation. Scientists eventually determined that DDT's metabolite, DDE, blocks normal calcium deposition during eggshell formation. As a result, there were few young birds to replace the withering adult population.

By 1994, however, at least 875 pairs of peregrines occupied territories south of the Canadian forest, including 150 pairs in California and 159 pairs in the eastern and midwestern states. A conservative estimate of the total North American peregrine population, counting birds in Alaska and northern Canada, added up to 6,550 pairs. Although the peregrine, which mainly feeds on smaller birds and can reach speeds approaching 200 miles per hour when diving in pursuit of prey, is hardly a common bird and never was abundant, its brush with extinction is now history, due in large part to the 1972 ban on virtually all domestic use of DDT.

Why, then, are some of the sleek raptor's best friends unhappy--or at the very least uneasy--about the proposed removal of the American peregrine falcon from the federal Endangered Species List, where it has resided since 1970? Why is there a bubbling brouhaha instead of a celebration of the end of an heroic rescue effort, in which 6,200 captive-produced chicks were released across the continent and tended mostly by volunteers until they took wing?

Simply put, there is concern that the falcon still is affected seriously by pesticides in some parts of the country, and that critical goals in the recovery plan for the species have not been met. Also, says Steve Torbit, a senior scientist at NWF's Rocky Mountain Natural Resource Center in Boulder, Colorado, the DDT ban alone did not do the whole job of rescuing the bird. "The ban did nothing to protect habitat, build public support or reintroduce birds to the wild."

Some experts say that politics rather than biology is driving the delisting process, which Secretary of the Interior Bruce Babbitt set in motion in June 1995 with a high-profile press conference on the roof of a Wall Street skyscraper. There, one of a dozen pairs of New York City peregrines was raising chicks. "The environmental laws and research programs that brought the peregrine back are now at risk of extinction themselves," said Babbitt, alluding to efforts by Congress to gut the Endangered Species Act and slash funding for the National Biological Service. "Future endangered species may not be as lucky as the peregrine falcon."

Criticism of the move was not unexpected. "I knew we were going to get slammed," says Mesta, the scientist in charge of shepherding the bird through the complex delisting procedure. "But the people who complain that we shouldn't delist the peregrine should step back and look at the big picture." The Fish and Wildlife Service, he says, "wants to demonstrate that the Endangered Species Act is working, and the peregrine falcon is the perfect, high-profile candidate."

That's precisely the point, though, that troubles more than a few peregrine specialists, among them Joel "Jeep" Pagel, a biologist at the Rogue River National Forest office in Medford, Oregon. Pagel, who monitors falcon nests in Pacific Northwest states, says peregrine reproductive success in northern California and Oregon remains low because of high residual levels of pesticide contamination and "extreme thinning" of eggshells. In a paper submitted to the Wildlife Society Bulletin, Pagel and two colleagues contend that prematurely delisting the bird for political expediency would set a dangerous precedent for other endangered species. They suggest that downlisting the peregrine to threatened status, as was recently done with the bald eagle, would be a more appropriate step at this time. That's also the view of the National Wildlife Federation, according to senior scientist Torbit. "We support downlisting first," he says, "as a responsible, stepwise process to assure the success of the eventual delisting."

But Tom Cade, founder of the Idaho-based Peregrine Fund, which spearheaded the falcon's reintroduction, says that delisting "is long overdue." Brian Walton, whose Predatory Bird Research Group in Santa Cruz, California, released 800 peregrines from San Diego Bay to the Columbia River, concurs. "There are pockets where productivity is low, but they're not significant enough for me to think the population can't sustain itself." The peregrine, Walton says, "is just not an endangered species. If you look at the data, there is no way it would be listed at this time."

To complicate the issue, several biologists in the West who would like to proclaim victory still believe the delisting probably shouldn't apply to falcons nesting east of the Great Plains. "There is still a nasty problem in the East," says Jim Enderson, professor of biology at Colorado College in Colorado Springs, who notes that the Fish and Wildlife Service opposes status changes on a regional rather than nationwide basis.

Although resident peregrines may be humdrum for bird-watchers in places along the Atlantic seaboard, reproductive success is sporadic or poor in areas like Chesapeake Bay, where biologists are finding high levels of DDE in peregrine eggs. Experts guess the poison comes from prey flying in from Central and South America. Only 7 of 15 Virginia nests produced young in 1995, "a fairly common phenomenon on the Bay," says Mitchell Byrd, professor of biology at the College of William and Mary in Williamsburg. Byrd also points out that the peregrine recovery plan goal for a minimum number of breeding pairs in the East has not been met, "nor are we remotely close in two of the recovery units."

Peregrine supporters also are disappointed that the falcon hasn't returned to its old mountainside haunts on the East's Appalachian backbone, preferring instead to homestead on urban skyscrapers and bridges. "The cliff faces probably aren't as inviting as they were 50 years ago," explains Craig Koppie, a Fish and Wildlife Service biologist in Annapolis, Maryland. "There are a lot more trees today and too many great horned owls, which raid peregrine nests."

Koppie suggests the falcon may have found a better niche in the cities, with plenty of vertical structures for nesting sites and an abundant food supply, especially pigeons. As an example of how popular cityscapes have become to peregrines, Walton notes that more than 50 falcons now winter on powerlines and along "cement rivers" in the middle of sprawling Los Angeles.

Meantime, peregrine delisting seems to have fallen off the fast track. A congressional moratorium on adding new animals and plants to the Endangered Species List was lifted in May, and the Fish and Wildlife Service's current priority is to make listing decisions on 160 species in immediate need of protection. Downlistings and delistings are now at the bottom of the agency's to-do list.

At least, that is, until Congress regroups after the November election and the Endangered Species Act is again under fire. The peregrine falcon, meanwhile, remains characteristically aloof to such matters, needing only the solitude of high ledges and an ample supply of poison-free prey to continue its spectacular comeback.