Homeless on the Range

Its speed is legendary, but the pronghorn can't outrun changes to its habitat in the American West 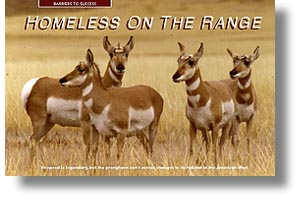 John Hervert has an eagle's-eye view of the endangered Sonoran pronghorn. Every week Hervert, an Arizona Game and Fish Department biologist, flies over a broad swath of the Sonoran Desert and listens for the beeping of radio-collared pronghorn. He's seen their tawny forms against the desert sands. He's watched them streak at 60 miles an hour across the creosote-dotted flats. He knows where to expect them. And he knows where not to expect them.


"In four years we haven't documented a single crossing of a paved road or of the boundary fence with Mexico," he says. "We'll often see the pronghorn 50 meters from the fence, moving along it. They never cross it."

The Sonoran is one of five subspecies of pronghorn, one of the world's swiftest animals. The creatures are uniquely adapted to their home in the West, but they are unable to outrun or adapt to some of the changes that humanity has imposed on them. As a result, pronghorn have vanished from about 75 percent of their original range, including California's Central Valley and large swaths of the Great Plains. Significant population declines have occurred since the species' numbers peaked at about 1 million in the early 1990s.

Nowhere in the United States are pronghorn in greater trouble than in the Sonoran Desert. Here, on both sides of the United States-Mexico border, an estimated 400 to 500 Sonoran pronghorn comprise the last remnants of a subspecies that once roamed as far as Southern California. "We think there is a very significant risk of extinction in the next 50 to 100 years," says Hervert. "That's what scares me."

Pronghorn as a species were mistakenly dubbed "antelopes" by American explorers and settlers because of their similarity to various African antelopes. In fact, pronghorn are in their own family, Antilocapridae, and not related to the African animals, though "antelope" persists as a common name.

Like the African antelopes, pronghorn are well adapted to open, exposed places. Their hollow, layered hairs insulate against severe cold or become erect to dissipate summer heat. Pronghorn thrive on a wide range of forbs, shrubs and cactus. Given succulent plants to eat, they survive without drinking water. Their huge eyes spot far-off predators.

But their signature trait is speed. John Byers, a University of Idaho biologist who has studied them on Montana's National Bison Range since 1981, recalls pacing a buck while driving just outside the preserve's perimeter fence.

A pronghorn's sprint speed of nearly 60 miles per hour is bested only by that of a cheetah, but unlike a cheetah it can keep up a fast pace for miles. It could beat the best human runner in a marathon--even if the human had an 18-mile head start.

This ability interested Stan Lindstedt, an animal physiologist at Northern Arizona University. By studying two orphaned young on treadmills, he found that pronghorn simply maximize the capabilities other mammals share. Thanks to an extra-large windpipe and increased diffusion in the lungs, pronghorn can consume five times as much oxygen as a similarly sized goat; their hearts are three times larger. They have more red blood cells, allowing faster transport of oxygen to muscles. They have virtually no extra baggage in the form of fat. "They're a machine designed for endurance," says Lindstedt.

Pronghorn run so superbly that biologists have questioned what they're designed to run from. Before the devastation of predators that accompanied European settlement of the West, they had to contend with lengthy pursuits by packs of wolves, but even wolves can't run as fast as pronghorn. Byers postulates that pronghorn, whose lineage goes back 20 million years in North America, evolved as the prey of now-extinct predators. "Pronghorn are ridiculously too fast for any modern predator," he says. But in the Pleistocene they were preyed on by packs of hyenas, which chased their quarry long distances; by short-faced bears, which attacked from ambush; and by American cheetahs, which were sprinters. As a result, says Byers, pronghorn evolved the ability to sprint and run long distances.

Modern predators are not too slow to catch pronghorn fawns, however. Adult females bear twins in the spring, just when coyotes, bobcats and golden eagles have young of their own to feed. All three predators eagerly take pronghorn fawns--when they can find them. Virtually scentless and well camouflaged, fawns are tough to locate. They grow quickly on a diet of mother's milk, which contains three times as much fat as a cow's. At a couple of days of age they can outrun a human. Still, at least half the year's young usually fall prey.

"Mother Nature seems to have compensated for the fact that at least 50 percent of the fawns are generally taken each year by having does produce two each year," says Jim Yoakum, a biologist who spent 47 years studying pronghorn for the federal Bureau of Land Management and is now a consultant.

Predation on adult pronghorn is uncommon, but adults face other problems. There is, for example, that odd reluctance to jump over even a low fence.

"Pronghorn have been living in wide-open terrain for so long that their behavior doesn't allow them to jump a fence, even though they can physically do it," says Yoakum.

Even a simple barbed-wire fence over which deer spring with ease can form an insurmountable barrier. Though some ranchers and wildlife managers have retrofitted fences with high, barbless lower strands under which pronghorn can squeeze themselves without injury, fences continue to split much of the West into what are, to pronghorn, discrete islands.

Highway traffic, too, can keep pronghorn from moving, even on narrow two-lane roads. "They look left, they look right, and they see 'predators' coming at them from both directions," says Charles van Riper, a researcher with the U.S. Geological Survey who recently documented how pronghorn at Arizona's Petrified Forest National Park refuse to cross highways. "They are a diurnal species and apparently do not cross the freeway at night, when there is less traffic."

Sonoran pronghorn have long epitomized successful adaptation to a harsh environment. Slightly smaller and paler than the other four pronghorn subspecies, they are even better equipped to handle drought. They range on public land in Arizona: some of it, on Cabeza Prieta National Wildlife Refuge and Organ Pipe Cactus National Monument, is designated wilderness; much of the rest comprises the Barry M. Goldwater Air Force Range, where military training heavily impacts some areas but leaves vast stretches of desert relatively untouched. The area is so wild that a proposal was recently floated to establish a 5,000-square-mile Sonoran Desert National Park.

Here pronghorn are free from development pressure and, except in a small area, from competition with cattle. There's even some evidence that military training benefits them, as they favor target areas where bombing destroys the prevalent but largely inedible creosote, thereby fostering the growth of nutritious annuals.

But the full picture of how human activities in this uninhabited area affect pronghorn is complex. Live-ammunition bombing and strafing is a danger. Low-level flights by military jets or Border Patrol helicopters may cause stress to wildlife. Low-flying aircraft are one of the potential stresses to pronghorn cited in a recent lawsuit against the U.S. Fish and Wildlife Service and 10 other federal agencies by the conservation group Defenders of Wildlife. The lawsuit is slowly wending its way through the courts, and how it will affect management is still unknown.

In recent decades, the size of the herd hasn't grown much despite full legal protection (the subspecies was listed as federally endangered in 1967). "The does bear twins every year. Because of that, they have tremendous potential to increase their numbers," says John Hervert. "But every year we have the frustration of seeing most of the fawns die."

In other areas fawn mortality generally occurs in the first month, when fawns are small and most vulnerable to predators. Here most deaths occur in the third or fourth month, after the young are weaned. Hervert suspects poor nutrition may be to blame for fawn mortality.

Adult Sonoran pronghorn forage extensively on cactus during the dry months of early summer, especially on the fruits of chain-fruit cholla. Cactus isn't nutritious, but it does contain a great deal of water--probably all the water adults need. Growing fawns may need more moisture, or more nutritious forage, than adults. Chain-fruit chollas grow tall, and it may be that fawns can't reach their fruits. Even if they can, this food may not be nutritious enough to sustain them. That's the downside of pronghorns' leanness: they can't store energy in the form of fat and can't go for long without food.

Because food supplies are scarce and localized here, Sonoran pronghorn roam widely. Hervert tracked one radio-collared female over 1,500 square miles in a year (in lusher areas a few square miles may make up a year-round territory).

"They can take advantage of a small rain shower in one valley when it might be dry in the next valley," he says.

And yet amidst all this space they're locked in. They apparently do not cross Interstate 8 or Highway 85, which mark the north and east boundaries of the Air Force range. To the south, the border fence with Mexico is more of a barrier to them than it is to illegal immigrants and drug smugglers. To the west, the desert becomes too dry even for pronghorn.

These barriers prevent genetic mixing of the American and Mexican herds. They also prevent pronghorn from reaching the Gila River, north of I-8, and the Rio Sonoyta in Mexico. Those river corridors probably once provided succulent forage during lean summer months. But now the pronghorn can't get to these corridors. Even if they could, the rivers and their vegetation have been reduced by agriculture and urban use. Trapped in the most arid part of their historic range, Sonoran pronghorn are stretched thin.

"If we go into a long period of below-average rainfall, we could have no recruitment, and that could lead to extinction," says Hervert.

To forestall that possibility, state and federal wildlife officials are currently attempting to determine whether habitat appropriate for reintroductions exists elsewhere within the subspecies' historic range. "Most likely we won't be able to recover the species without reintroductions," says Hervert.

That's a big hurdle. A reintroduction would require 25 or 30 individuals. No one wants to remove that many from the currently small Arizona population, so it will likely not take place unless the herd grows on its own, and then only if an appropriate new site can be found where human impacts would be minimal.

John Hervert, meanwhile, continues to watch pronghorn from above. He's pleased that a wet El Niño year, 1998, allowed a bumper crop of fawns to reach adulthood. He finds himself in the same position as desert dwellers throughout history: He hopes for rain and prepares for its lack. He makes plans to water the desert or to help reintroduce the species elsewhere, all the while hoping that nature will make those plans unnecessary.

"If we have very good conditions for a while, we won't have to lift a finger for them," he says. "After all, they would have gone extinct a long time ago had they not had the ability to live here."