Attack of the Killer Whales

A rare look at one leviathan preying upon another 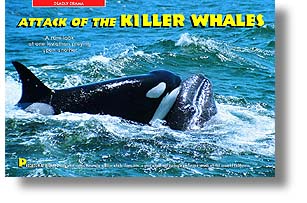 Was that a whale´s blow I saw out of the corner of my eye or simply spray? Feeling somewhat ill in the choppy seas, I scanned the ocean horizon off Monterey, California, for the distinctive, heart-shaped blow of a gray whale.
I was part of a production team from the British Broadcasting Corporation (BBC). Two years ago, research biologist Nancy Black of Monterey Bay Whale Watch had approached the BBC to see if we would be interested in trying to film an extraordinary piece of marine-mammal behavior. She and her colleague Richard Ternullo had witnessed killer whales, also known as orcas, hunting down and killing gray whale calves off the California coast.

I knew that to be able to capture such rare behavior for the first time would be a real coup. But then again, so would filming the Loch Ness monster, and I thought that seemed just about as likely. In 10 years of working with whales, Black had seen only one attack from start to finish. Still, we decided to try.

Of course, before we could even begin to attempt to film an attack, we first had to find some killer whales. As we bobbed in the water that day, I felt skeptical about the likelihood of spotting a whale blow in such conditions, and I wondered if my nausea was seasickness or nervousness at the prospect of returning home with nothing to show for three weeks of hard work. Suddenly the marine radio crackled into life, and a fisherman radioed, "I think I see something! Looks like a pod of killers, and they´re after something!" We noted the coordinates of the sighting and set off. Was our luck about to change?


We knew the gray whales were well on their way north on their annual migration. The mothers give birth during January and February in sheltered lagoons in Baja California and then slowly head to Alaskan summer feeding grounds. The calf begins its 6,000-mile swim north when it´s just a few weeks old. In April and May, the mothers and calves pass by Monterey Bay. Here, the more experienced mothers are thought to lead their calves close to the shore, which is a longer but safer route, as the kelp beds in the shallows offer some protection from attack. But some mothers, thought to be among the youngest, take a shortcut across the bay. That route takes them over underwater Monterey Canyon, which is about 20 miles wide and almost two miles deep in places. Over such deep water, gray whales are vulnerable to attack by killer whales.

The radio call threw us into a flurry of rechecking our camera gear. Then, ahead, we saw flashes of black and white: killer whales. And just a few hundred yards beyond them were a gray whale mother and her calf. The gap between the two species closed rapidly. Suddenly, the water erupted with violent splashing as whale flukes and fins broke the surface. It was an attack!

I could now see why killer whales´ hunting methods have been compared with those of wolf packs. The pod of about 15 (mostly female) killer whales worked together to tire the gray whales and separate the mother and calf. The assault was sustained and violent. The killer whales repeatedly rammed into the side of the young gray whale with extraordinary force, no doubt inflicting serious internal injuries. Some of the attacks were so intense that the calf´s body was thrust partly out of the water. The calf was about 20 feet long, so the force needed must have been tremendous.

It was impossible not to admire the cooperation and strength in the killer whales´ concerted efforts. We had front-row seats at a natural event repeated the world over: predators at work. I was fascinated by the sight, yet I admit it was painful to watch the desperate calf fight for its life, and I wished the killer whales would dispatch it quickly. The most moving sight was that of the mother trying to save her calf. When the killer whales separated the two grays, she attempted to reposition herself to protect the calf. More dramatically, she tried to support it by swimming underneath it to push it out of the way of the killer whales. Again, an incredible feat of strength.

As the calf began to roll in the water, we could see its bleeding pectoral fins, with distinct teeth marks where the killer whales had been holding the youngster to prevent it from surfacing and so drown it. The water around the calf began to turn red. After hours of trying to protect her calf from the sustained attacks, the gray whale mother slowly swam toward shore, almost as though she realized that her offspring was lost. We glimpsed the calf´s dappled flank as a small group of killer whales fed by diving and pushing it to the surface. Then the calf´s body sank slowly beneath the surface for the final time.

Sue Flood, an assistant producer with the BBC Natural History Unit, is working on The Blue Planet, a television series on the oceans to be broadcast in 2001.