Long overlooked, the fisher and the marten are now coming to light as key indicators of forest health in the West 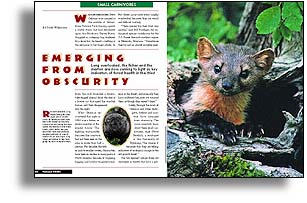 Wildlife researcher Steve Gehman was camped in the middle of Yellowstone National Park, bracing against a winter storm that had descended upon the Shoshone Geyser Basin. Snuggled in a sleeping bag, sheltered by a snow hut, he heard a rustling at the entrance to his frigid abode. In from the cold bounded a brown, tube-shaped animal about the size of a house cat that eyed the startled human and then disappeared into the night.


What Gehman encountered that night in 1985 was a fisher, an elusive member of the weasel family. The sighting was notable because the creature had not been seen in the area in more than half a century. For decades, the fisher and its smaller cousin, the marten, have been in decline in many parts of North America because of trapping, logging and habitat fragmentation. But these carnivores were largely overlooked because they are small and difficult to study.

"These species live their lives very quietly," says Bill Ruediger, the endangered species coordinator for the U.S. Forest Service´s northern region in Missoula, Montana. "Sometimes they´ve had an almost invisible presence in the forest, and ironically they have suffered because we treated them as though they weren´t there."

Lately, through the work of Gehman and other biologists, fishers and martens have emerged from obscurity. The more scientists learn about these small carnivores, says Steve Buskirk, a zoologist at the University of Wyoming, "the clearer it becomes that they are telling indicators of ecological change in the old-growth forest."

The two species "always stake out territories in forests that have a preponderance of old growth," says researcher John Bissonette from Utah State University, who has studied martens since the early 1980s. As a result of these and other findings, fishers and martens (along with two other carnivores, wolverines and lynx) have been chosen by the U.S. Forest Service as key species to help the agency monitor the ecological health of western forests.

Historically, fishers and martens were found from the Pacific rain forests east to the Maritime Provinces of Canada, and from the taiga south to the mountains of New Mexico. (The two species are related to martens and sables found in Europe.) They prefer to dwell in dense coniferous forests cluttered with fallen logs, which provide cover for their principal prey and also afford them protection from hawks, owls and other predators.

Martens, which weigh between one and three pounds, prey chiefly on voles and other small rodents. The larger fishers, which weigh between 4 and 12 pounds, thrive on porcupines and snowshoe hares (despite their name, they rarely fish). Both species are adept at climbing trees and will scavenge bird eggs. Much of their lives, however, is spent combing the forest understory.

During the winter months, martens do most of their foraging on top of the snowpack and in crevices below the snow where rodents travel. Studies show that fallen logs and branches provide portals for martens to move easily in and out of this realm. The most common prey species traveling along this highway are mice and voles.

Female martens breed about once a year starting at two years of age, producing litters of between one and five kits. The creatures may live as long as 15 years. Fishers have between one and six kits on average, and live about as long as martens. Pound for pound, fishers and martens have some of the largest home ranges of any carnivores. A marten may roam an area as large as 4 square miles, while a fisher may range across thousands of square milesÑmore than the territory covered by an individual grizzly bear, a species famous for its wide wanderings.

Although fishers view the smaller martens as rivals and potential prey, each animal possesses distinct advantages over the other in their overlapping territories. Martens can escape from fishers in deep snow because their big, furry feet and lighter frames allow them to trek across the soft crust without sinking in. Fishers tend to avoid open snowfields, preferring to dwell in river corridors, which attract hares and porcupines.

The soft, dark fur of both species made them treasured commodities in global trade. Prices for prime fisher pelts reached as high as $150 during their peak at the turn of the last century. As a result, both fishers and martens have been intensively trapped in the past. Added to this pressure, the clearing of forests for agriculture and timber fragmented and destroyed their preferred old-growth habitat. Thus, by the early 1900s, martens were extirpated from coastal northern California, North Dakota, Illinois, Indiana, Ohio, Pennsylvania, New Jersey, West Virginia and from much of southern New England. Fisher populations also declined in many of these areas, leaving both species with major strongholds only in the West and Canada.

During the past 50 years, even those remnant populations have suffered from the advent of mechanized forestry. Recent research has helped explain why intact forests are vital to these species, and how these small carnivores are affected by large-scale logging operations.

Gehman has conducted carnivore surveys in Yellowstone since the early 1990s. In recent winters he and his biologist wife, Betsy Robinson, (who both work for the research organization they founded, Wild Things Unlimited) have studied martens in the adjacent Gallatin National Forest where old growth abuts logged areas.

"In logged areas, marten presence appears to be affected by the size and age of a cut," Gehman says. "The older the regrowth of new trees, the better."

Work by marten specialist Francois Potvin in Canada suggests why this is so. As habitat disturbance increases, so does the size of a marten´s home range, meaning that the animal must wander further and expend more energy to hunt and travel back to its den to feed its young. If the land disturbance causes a home range to expand too large, eventually the marten cannot sustain itself and disappears.

"Martens have an aversion to open areas because they are vulnerable to predators, such as owls, wolves and foxes, and the hunting success rate for snowshoe hares and voles is poorer," Potvin says. "If you want to maintain martens, you have to cut no more than 30 percent of your forest base."

A related theory is offered by Rod Flynn, a biologist with the Alaska Department of Fish and Game. Flynn´s studies of martens have focused on Chichagof Island, part of a coastal archipelago in Alaska that includes the Tongass National Forest. Martens were introduced to Chichagof and neighboring islands in the 1930s and 1940s to bolster the fur harvest. The transplants seemed to thrive until the 1960s, when loggers started to remove billions of board feet of timber from the Tongass.

"The thing that intrigues me is martens are always existing on a fine margin," Flynn says. "They can´t store much body fat, which means they are always out there trying to get something to eat. Up here it rains a lot, and martens are always trying to stay dry. They can´t do that without cover and there isn´t much left after a logging operation moves through."

Fishers appear to be even more sensitive to disturbance of their forest habitat. Researcher Kim Heinimeyer from the University of California-Santa Cruz pointed out in a study of fishers in northern Montana that they rarely venture farther than the length of a football field away from river corridors, their preferred habitat. So, even though fishers have large ranges, a little logging in key riverside habitat can pose a big challenge to the animals.

The impact of forest disturbance on fisher and marten numbers as a whole are difficult to gauge, because scientists do not have enough information on the reclusive creatures to estimate their total populations. But it is clear that, outside the Rockies, the Sierras, the Cascades and northern New England, the two species are being increasingly isolated by human activities in the contiguous 48 states.

Fishers and martens are not near extinction, experts say. "There are trouble spots but I don´t think they are in dire straits, not yet," says Utah State´s Bissonette. "Much depends on what we do with our remaining old-growth forests and how we promote recovery with what already has been heavily logged."

The key to restoring and protecting forests lies largely with federal agencies, conservationists say. In the past, these agencies largely ignored the role of forest carnivores in the function of wild ecosystems, says Tom Skeele, executive director of the Predator Conservation Alliance, a conservation group based in Bozeman, Montana. "They were considered expendable in much the same way that large carnivores, like grizzlies, wolves and mountain lions, were considered expendable a century ago," Skeele says. "But now the scientific community knows better."

Forest Service officials now realize that they need to take the declining status of martens and fishers seriously. "The irony," says Christopher Wood, a senior aide to Forest Service Chief Mike Dombeck, "is that these species started to disappear literally beneath our noses but we were unable to recognize it was happening. For decades, we´ve been talking about how to find the key to sustainable resource management, and all along, martens and fishers could have provided us with an answer."

By protecting a variety of forest types, including old growth, he says, society sustains its widest complement of forest-dwelling wildlife. "We need to approach our forests as banks of capital," Wood says. "Fishers and martens are part of our natural wealth."

Todd Wilkinson is a frequent contributor to National Wildlife. He is the author of Science Under Siege: The Politicians´ War on Nature and Truth (Johnson Books, Boulder, Colorado, 1999).