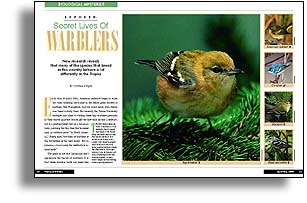 Each year in early May, American redstarts begin to stake out their breeding territories in the dense green forests of northern New Hampshire. And for many years, Tom Sherry was there to study them. But recently, the Tulane University biologist has taken to visiting these tiny warblers primarily in their winter quarters. He recalls the first time he saw a redstart, not in a pristine forest, but on a Jamaican farm, catching the tiny flies that hovered near an outdoor privy. "In North America," Sherry says, "we think of warblers as the butterflies of the bird world. But in Jamaica, a local name for redstarts is latrine birds."

The point is not that Jamaicans don't appreciate the beauty of warblers. It is that these familiar birds can seem like different animals on their wintering grounds. In some species, the males molt out of their dazzling breeding plumage into drabber feathers. In other species the adult males keep their flashy feathers, but their winter populations include large numbers of immature birds, which haven't yet grown the distinctive breeding plumage that U.S. bird-watchers recognize. And even those warblers that look the same year-round may change their behaviors in the Tropics.

Black-throated blue warblers, for instance, are insect-eaters up north, but they also eat fruit and drink nectar on their winter turf in the Caribbean; they will even stake out a feeder and chase away hummingbirds. Warblers that are strictly territorial on their breeding grounds, including magnolias, bluewings and northern parulas, may peacefully join a mixed-species foraging flock in their wintering areas.

Many Americans may think of warblers as local residents that leave for a short winter vacation. But in reality, they are tropical birds that pay a brief visit to this country. The 52 species of warblers that breed in North America spend, on average, just four months out of each year in northern climes. In the spring and fall, they migrate, reaching heights of as high as 21,000 feet and flying as far as 400 miles across open water in the Gulf of Mexico. During winter, they live in Central America, northern South America and the islands of the West Indies. This habit of commuting to the New World Tropics earns warblers the moniker, neotropical migrants.

Until recently, bird scientists have, like U.S. bird-watchers, tended to focus on warblers during the breeding season. "Until the 1970s," says Sherry, "what we knew about the winter distribution and ecology of neotropical migrants was pretty much restricted to labels on museum specimens and a few anecdotes from field observations." Information about the lives of warblers in winter has been slow in coming, in part because many Latin American countries do not yet fund extensive bird-monitoring efforts and also because it is easier for North American researchers to study local birds. However, another factor is that in the Tropics the traditional tools scientists use to study breeding-bird populations have been about as ineffective as a snowmobile in the surf.

Consider that workhorse of bird censusing, the point count. To figure out which species are found in a given area, ornithologists often stop, look and listen. A birder conducting a point count covers a known amount of territory, stopping at prearranged points to identify birds by sight or by their songs.

This method poses two problems in the Tropics. One is that it is difficult to identify species when they're not in their distinctive breeding plumage. Another is that during winter the males rarely sing their characteristic songs, which serve to defend a breeding territory or to attract a mate.

The solution for winter censusing has turned out to be as simple as adding a boombox and a cassette tape or CD to the ornithologists' list of essential gear. "Birders have known for a long time that they could use a tape recording to draw birds out of the undergrowth," says Gary Graves of the Smithsonian Institution's National Museum of Natural History. "But using playback for comprehensive censuses is new."

When Tom Sherry and his colleague Alexander Sliwa, now working in the Republic of South Africa, broadcasted the recorded songs of breeding redstarts and black-throated blue warblers on the birds' wintering grounds in Jamaica, the results were striking: With the playback technique, the scientists could detect 3 times as many redstarts and 2.3 times as many black-throated blues as they did with the simple "stop-look-listen" approach. The sounds even attracted other species: ovenbirds, parula warblers and prairie warblers.

Redstarts and black-throated blue warblers have healthy populations, but the playback technique has also helped scientists to locate species that are rare. Graves recalls looking for wintering populations of Swainson's warbler--a National Audubon Society species of special concern--in the Blue Mountains of Jamaica. "The people in the local bird club told me I was wasting time and money, that this warbler had last been seen in the Blue Mountains 17 years ago," he says. Thanks to playback, Graves was able to locate the largest known wintering population of this species. "The birds were right along the road at Hardware Gap, the place in Jamaica most visited by birders."

Knowing where warblers winter is key to conservation efforts. "In this country we're spending millions of dollars a year on migratory bird research," notes Graves. "We've shown how birds are affected by forest fragmentation, cowbirds, pesticides, microwave towers, even pet cats. And we go to all the trouble to preserve breeding habitat for certain populations, but it's not going to make one bit of difference to their ultimate survival if we don't know where these birds are wintering."

There's more than just the size of available habitat at stake. Habitat quality is also a concern of scientists. "Very few people have looked at this," says Al Strong, a visiting professor at the University of Vermont who worked with Tom Sherry as a doctoral student. "You may see a habitat with a lot of birds. But you have to remember that density of birds is not a good indicator of habitat quality. Maybe they're packed in there because they've been forced out of better habitat."

The issue is not simple survival. The quality of winter habitat also influences a bird's success months later on the breeding grounds. That's the conclusion drawn by Peter Marra, a senior scientist at the Smithsonian Institution's Environmental Research Center, and his colleagues Keith Hobson of the Canadian Wildlife Service and Dick Holmes of Dartmouth College. Their discovery comes thanks to the use of another new tool for studying the lives of migrants on their wintering grounds: so-called isotope tags.

The research builds upon an earlier study which showed that in winter, redstarts segregate by gender. Some--mostly the largest, oldest males--live in mangrove forests: lush, swampy refuges that swarm with insect prey. These birds defend their turf, forcing other redstarts--mostly the females and younger males--to live in dry scrub forests where food is harder to find. Sexual segregation on the wintering grounds is not unique to redstarts; it has been identified in 12 species of wood warblers, including black-throated blues and hooded warblers.

Marra and his colleagues wondered what would happen in the spring, when the birds arrived on their breeding territories. The researchers thought that the well-fed birds might have some advantage over their semi-starved peers. The question was, when they spotted a specific warbler on its northern breeding ground, how could they tell where it had spent the winter? "One of the biggest gaps in our knowledge was that we could not link the winter events to the summer events," says Marra. "We couldn't track these birds individually."

Not that other scientists haven't tried. One traditional tool they've used is bird banding, in which the creatures are fitted with individually numbered ankle bracelets and released. By recapturing some of the tagged birds, researchers could track their travels. "But hundreds of thousands of birds have been banded," says Gary Graves, "and there have only been a few hundred returns. Furthermore, most birds are banded on migration, so that doesn't tell us much about wintering or breeding grounds."

Radio tags have been another traditional tool for tracking bird movements; they allow scientists to follow the movements of a single individual. But despite recent advances in miniaturization, radio tags are still not practical for tiny warblers. "Larger birds can handle it," says Graves. "But a warbler is just not going to make it across the Gulf of Mexico wearing one."

Instead of employing these conventional approaches, Marra used a new technique: He looked for isotope signatures in the birds' bodies. The novel procedure is based on the idea that, he says, "You are what you eat."

Mangrove forests and dry forests contain different kinds of plants; insects eat the plants and the warblers eat the insects. In the process, the birds take in elements that characterize the location where they were feeding. This means a tiny sample of blood from a redstart on its breeding ground can reveal where the bird spent the winter months: in lush mangrove forests or the dry scrub woodlands.

The researchers found that habitat quality did make a difference. The first birds to arrive on the breeding grounds were the ones that had wintered in the mangroves. Birds from the dry forest came winging in as much as a month later.

"Several recent papers have already demonstrated that when birds arrive on the breeding ground is the most important factor determining reproductive success," says Marra. The scientists believe that early birds really do get the worm--or rather, they grab the best territories and nest sites. They also get the first pick of prospective mates. And if they lose their eggs or young to predators, they still have time to start a second family.

"So everyone knew birds that arrive early fledge the most young," says Marra, "but no one had considered what determines when those birds arrive?" Breeding success may rely on events that actually took place months ago, on the wintering grounds. "When we think about bird conservation," he adds, "we need to think about what happens to these birds on a year-round cycle."

The famed bird artist Francis Lee Jaques once said, "The difference between warblers and no warblers is very slight." He was speaking, of course, of how difficult it is for bird-watchers to see these forest sprites as they flit about in the treetops. But his words also express the challenge of bird conservation.

Populations can be threatened by circumstances on their breeding grounds, on their wintering grounds or while they are traveling between the two regions. Scientists now understand that even a small change in the amount or the quality of habitat can make a big difference in the lives of these tiny birds.