Long overlooked by forest managers, the flying squirrel is now emerging as an animal that is critical to the health of certain woodlands 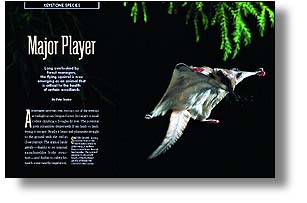 A northern spotted owl swoops out of the treetops at twilight in an Oregon forest. Its target: a small rodent climbing a Douglas fir tree. The potential prey scrambles desperately from limb to limb, trying to escape. Finally it leaps and plummets straight to the ground with the owl in close pursuit. The animal lands gently--thanks to its unusual parachutelike body structure--and dashes to safety beneath some nearby vegetation.


"That was quite a chase," says U.S. Forest Service biologist Eric Forsman after observing the encounter. The near victim--a northern flying squirrel--was lucky, at least for the moment. Throughout much of the Pacific Northwest, flying squirrels represent about 50 percent of the diet of the spotted owl, a threatened species. That´s why scientists such as Forsman, who are studying this predator-prey relationship, are spending more and more time in the woods these days.

And the more they look, the more they realize that the flying squirrel is a major player in the Northwest´s forest ecosystems. As a result, the animal is gaining increasing attention in forest-management decisions.

"We´ve begun to think of the flying squirrel as a keystone species in Pacific Northwest forests," says Andrew Carey, another U.S. Forest Service scientist based in Olympia, Washington. Such an animal is one that plays a disproportionately significant role in an ecosystem, far more than that suggested simply by the species´ abundance. The flying squirrel is now considered a keystone species, observes Carey, not only because of its overwhelming importance as a food source for owls and other predators, but also because it facilitates the survival of fungi that live in vital symbiosis with trees. Carey´s research indicates that forest managers can better evaluate their programs by tracking the size of flying squirrel populations.

The creatures often build their nests in abandoned woodpecker holes and natural tree cavities, or sometimes on branches, high above the ground. Northern flying squirrels breed once a year; a typical litter size is three. At five or six weeks of age, the young squirrels attempt their first short "flights" outside. The youngsters need no instructions: They seem to know exactly what to do.

In spite of their name, flying squirrels glide rather than truly fly. Some individuals reportedly have soared as far as 150 yards. Their aerial abilities are made possible by a loose fold of skin, called the patagium, that spans from wrists to ankles. When a flying squirrel leaps from a tree, it extends its arms and legs outward, stretching the patagium to act like a parachute or glider wing. In flight, the animal is able to steer adeptly right or left to avoid obstacles. Before touchdown, usually on a tree trunk, the animal lifts its tail and veers sharply upward to bring its feet into landing position. Though flying squirrels spend much time in trees, they descend frequently to the ground in search of food.

"We´ve learned that in the Pacific Northwest flying squirrels feed primarily on truffles," says Carey. Truffles are underground fungi that bear the spores of so-called ectomycorrhizal fungi. Such fungi live in symbiosis with trees. The fungi form a coating on roots and probe the soil to help the trees take up nutrients and water. In return, the fungi receive sugars produced by the trees through photosynthesis.

Ectomycorrhizal fungi can be extraordinarily abundant in healthy forests, creating vast networks of fungal threads through the soil. During spring and fall, says Dan Luoma, an assistant professor of forest science at Oregon State University, a typical acre of Pacific Northwest woodlands may harbor anywhere from two to eight pounds of truffles. "They look like little potatoes," he says. "Typically they range from the size of a pea to a walnut, but I´ve seen them the size of a baking potato."

As they mature, truffles become increasingly odoriferous. A flying squirrel is able to find them by smell and then dig them out of the soil. The truffles´ spores pass through the squirrel´s digestive tract unharmed and wind up in the animal´s fecal pellets, often conveniently close to tree roots that the fungi can then colonize.

"The number of flying squirrels tends to increase as the forest ages," says Carey. In southwestern Oregon, for example, second-growth forests generally support less than one flying squirrel for every two acres, while old-growth forests may support three or four times that many. This pattern may be related to differences in the amount of decomposing woody debris. Old-growth forests generally contain more debris than forests that have been harvested, and the debris is thought to aid truffles by supplying nutrients to the soil and retaining moisture during drought.

When foresters remove trees in the region, they frequently also kill the hosts of the ectomycorrhizal fungi. This leads to a decline in the production of truffles. In turn, the number of flying squirrels may decline, as food becomes scarce. That translates into bad news for spotted owls, which are thought to prefer old-growth forests partly because of the availability of their favorite prey. The success of other predators such as weasels, martens, fishers and great horned owls can also be influenced by the abundance of flying squirrels.

Recognizing the complexity of these interactions, scientists are now puzzling over the question of how best to manage woodlands that are subject to commercial harvest. In the Northwest, where much of the old growth has already been harvested, some experts now believe that forests should be managed to retain the ecological processes characteristic of ancient woodlands. Rather than using traditional clear-cutting techniques, researchers suggest two alternative methods: The first, called legacy retention, centers on leaving behind standing live and dead trees, as well as fallen trees, during harvests, and allowing at least 90 years between cuts. The second strategy calls for relatively frequent removal of some young trees in previously harvested stands in order to produce less dense, more natural understories.

"Maintaining the health of ecological processes is the key to sustainable forestry," says Chris Maser, a former U.S. Bureau of Land Management field biologist and author of Forest Primeval and other books on forestry, ecology and sustainability. "That´s why we need to focus on the relationships between the owl, the squirrel, the truffle and the large wood on the ground that comes from old-growth forests."

Writer Pete Taylor formerly was an editor at Islands magazine.