In many parts of the country, great blue herons try to protect their families from nosy neighbors 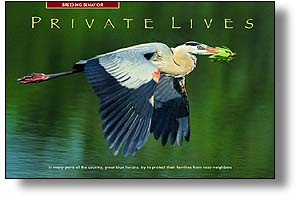 JOE WITT stands belly high in mountain laurel shrubs, peering through his spotting scope at one of Virginia's largest "heron cities"--or what he can see of it. Most of the avian metropolis remains hidden behind a dense canopy of late May leaves, part of Mason Neck National Wildlife Refuge's extensive woodlands.

Witt, the refuge biologist, doesn't mind the thick vegetation. He knows it will help screen him from these all-too-flappable birds. Spotting a pair of fuzzy gray heads peeking above the rim of a clump of sticks set high in a tulip poplar, Witt scribbles a "two" in his ledger, adding to his tally of great blue heron chicks. Then he swivels his scope to the next visible nest, then the next.

Witt is undertaking his annual spring survey of the colony so that the manager at this refuge a few miles south of Washington, D.C., can gauge whether this protected area is continuing to safeguard nesting herons. The spring count will be supplemented by a survey the following February, when the previously camouflaged nests stand out on the skeletal trees like twiggy Christmas ornaments.

At Mason Neck and elsewhere, great blue herons do their best to keep their breeding lives secret by keeping their nests out of sight. This explains why many people have seen these birds' lakeside manner--their often-solitary vigils in placid water, labored flight and grating squawk-- but few have observed their colorful and often cacaphonous private family life. The reason for their reticence is not surprising, Witt says: "They don't like predators or people nearby." And if they are disturbed by one or the other early in the breeding season, they may abandon their nests for the year--or forever.

As humans encroach on prime heron nesting sites, such disturbances are on the rise. Although heron populations are stable or increasing in most of their range, biologists sound a note of caution. "Great blues are not something we have to worry about now, but in 30 years, maybe," says R. Michael Erwin, a biologist with the U.S. Geological Survey's Patuxent Wildlife Research Center in Maryland.

Great blue herons are the largest North American members of the family Ardeidae, which includes 65 species of herons, egrets and bitterns. These stately birds breed across the continent, from southern Alaska to southern Mexico, in areas blessed with fish-rich rivers, marshes or lakes. (Some of the birds also breed in the West Indies and on Ecuador's far-flung Galápagos Islands.) Breeding usually occurs between January and March, but in warmer areas such as southern Florida and the Galápagos, breeding occurs nearly year-round.

Like many other herons, great blues seldom nest alone. Sometimes they nest alongside other wading bird species. "There's an advantage to nesting in such large numbers," says Witt. "You overwhelm the predators--they can't get all of you." Such predators include raccoons, opossums, crows, snakes, hawks, great horned owls and bald eagles. Islands or swamps provide added protection, creating a moat effect that thwarts many land-based predators.

The birds take advantage of natural camouflage to keep their nests safe from predators lurking both on the ground and in the air. Prime nesting real estate often consists of the lofty, shady crowns of trees, where leaves and branches screen the birds' two- to three-foot-wide nests. Herons aren't choosy about the type of tree, and in some treeless landscapes, the adaptable birds set up shop in shrubs, cacti or even on duck blinds.

Males typically arrive first at breeding grounds from their winter territories in the Southeast United States or South America, staking out nests or assembling new ones. A few days later, the females arrive, launching the males into bouts of frenzied exhibitionism.

There's a lot at stake, for unlike geese, loons and some other large birds, many great blue herons choose new mates and nest sites each season. Always dapper, their gray-blue bodies dressed up by black shoulders, chestnut thighs and white, black-striped heads, both male and female great blues don extra breeding-season embellishments. Fresh plumes spray from their chests and backs, and normally yellow bills and greenish brown legs flush red, while the skin between eye and bill turns lime green.

Courting herons put these adornments to good use, flashing them in displays aimed to impress prospective mates, strengthen existing pair bonds or keep other herons away from the nest. Throughout the colony, birds stretch and snap their necks, clatter bills, ruffle feathers or slowly flap around in ceremonial flight.

Sticks are the currency of the colony. The birds fight over them and depend on them for successful nesting. Males gather most, snapping off foot-long, pencil-thin lengths from branches, picking them off the ground or stealing them from neighbors' nests. Inside a finished nest, a female lays two to five pale blue or greenish blue eggs, which rest in a shallow indentation lined with pine needles, moss, grass or other soft material.

Males and females share incubation duties, which last a month, then spend about two months feeding and brooding their growing young. Despite the parents' hard work, many hatchlings die, falling to predators or toppling out of nests during storms or after taking a wrong step. Also, the smallest and youngest nestlings often starve or are pushed from the nest by larger and more aggressive siblings. After two months, the surviving nestlings are adult size, and stand at the edge of the crowded nest, stretching their wings. Soon after maiden flights, they flap off on their own.

But even out of the nest, immature herons face many dangers, not least of which is their own inexperience. In their first year, many cannot catch large fish, and instead frequent farms, chasing after voles while avoiding dogs, fences and other perils of civilization. Those that survive soon learn to use the the tools at their disposal: five-and-a-half-inch-long daggerlike bills, keen eyes and long legs. They hunt a wide variety of fish and, in times of shortage or opportunity, a menagerie of other creatures.

The great blues' opportunism has served them well. According to U.S. Geological Survey data, between 1966 and 1998 heron populations appear to have been stable or increasing in 41 U.S. states and six Canadian provinces. But because the birds are flourishing, their colonies often escape biologists' attention as the scientists focus on more troubled species. This fact, together with the birds' reclusive breeding habits, makes it hard to track the status of heron colonies. But there are several examples of a colony dramatically declining or disappearing after people move next door.

The abandoned heronry at Blue Heron Hills Country Club is such a case. The facility, southeast of Rochester, New York, was named for the 25 or so heron pairs that once nested there. When the club was built in the mid-1980s, the heron nest trees were spared as part of the course greenscape. But about five years later, a housing development was built close to the trees.

"They abandoned the site shortly-- probably within a year--after houses were built adjacent to the nesting site," says Jack Watson, a wildlife technician for the New York State Department of Environmental Conservation, who lives near the site and drives past it every day. "Obviously, anyone looking for answers should consider the possibility that the disturbance created by development and human habitation in such close proximity to the rookery could be factors in the herons' decision to abandon an established nesting site."

Similar disturbances have been noted in other parts of the country, including the disappearance of three or four colonies north of Denver, probably lost when a suburban housing boom converged on the reservoirs where the herons once nested. And logging has caused the desertion of great blue heron colonies in Virginia, Pennsylvania and Ohio.

Researchers have found that herons can learn to adapt to some human activities. "Herons are sensitive to disturbance by humans in isolated areas, but not at urban sites," says Ross Vennesland, a graduate student at Canada's Simon Fraser University, who has studied how the residents of different British Columbia heronries react to nearby human activities. "Colonies near to heavy human activity, such as the colony at Beacon Hill Park in downtown Victoria, ignore the multitudes of people right under the nest trees."

And if the birds don't return the following season, much more than a generation of herons is at stake. If the herons find another suitable breeding site, it may take several years to reach former population levels. And that's a big if. "Finding alternative nesting places is getting more challenging all the time," Erwin says. "For example, in the mid-Atlantic, we don't have many large expanses of forested wetlands left."

As development crawls across the great blue heron's habitat in the mid-Atlantic and elsewhere, observations about the herons' breeding behavior will be increasingly important. Biologists will need to carefully monitor heron colonies to ensure the birds get the space they need, as Witt does at Mason Neck each winter and spring.

As the May sun shines down on the calm waters lapping the edges of the colony, herons feed and cruise by Witt as he watches the latest crop of young birds. Cricket frogs tick from the marsh grass and a white-splotched immature bald eagle floats past.

"We're just trying to keep everybody happy," says Witt with a smile. The herons' squawks and clucks punctuate his words, as if in approval.

An avid birder and writer, Maryland resident Howard Youth has seen 30 of the world's 65 heron species, but the great blue heron remains his favorite.

Few Americans have worked as hard as Sigurd Olson to safeguard the habitat of the great blue heron and other wildlife in the streams and lakes of the Upper Midwest and elsewhere. One of the nation's most respected outdoor writers and conservation activists, Olson was inducted into the NWF Conservation Hall of Famein 1993. In his numerous books and articles, he wrote eloquently about America's wild heritage.