The Bird That Flies Through Water

Scientists continue to marvel at the American dipper, a species remarkably adapted for life near raging rivers 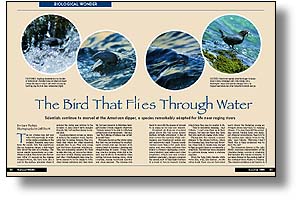 The icy stream runs fast and wide with snowmelt, its white water surface sparkling in the sunlight. Prismatic spray rises from the rapids. Into this maelstrom flies an American dipper, a stub-tailed bird about the size of a starling. The dipper alights momentarily on a mid-stream boulder, then dives into the torrent. After 15 seconds on the surging stream bottom, the bird bobs like a cork to the surface, precisely where it entered the water, and returns to the boulder. A juicy insect larva dangles from its bill. Just another dinner in dipper land.

American dippers occupy an unusual niche in the songbird world. Inextricably tied to racing streams, they routinely feed where few other terrestrial animals dare to go. They rear young just feet from churning whirlpools. They are splendidly adapted for their aquatic life-style, yet even in the wilderness have trouble finding appropriate nest sites. Ornithologists have long believed dippers to be too fragile to withstand human intrusion into their habitat, but new research by Montana biologist Sophie Osborn suggests otherwise. "Dippers appear to be able to withstand certain types of development," she says, "and the building of bridges may actually benefit them."

Formerly known as the water ouzel, this bird was rechristened by ornithologists several years ago because of its curious habit of dipping--bending and straightening its knees. Young birds may practice dipping while still in the nest, and adults do it repeatedly when resting between feeding dives, while courting, during territorial disputes and when alarmed. The dipping rate tends to rise with the degree of arousal to as many as 60 dips per minute.

Abundant oil from an oversized gland above the tail keeps dipper feathers virtually waterproof. A flap of skin covers the nostrils while submerged, and translucent eyelids permit underwater sight. Dippers rarely venture more than a few yards from water, and even when airborne they follow a stream's zigzagging course. Like waterfowl (and unlike most other songbirds, which lose and replace feathers gradually), dippers compress the annual molt of their flight feathers to a week or two in August, during which time they may be unable to fly.

"They're absolutely amazing," says Osborn. "I can't even stand up in these streams, but here are these tiny birds that dive right into raging white water."

Facing into the current, a dipper plunges to the stream bottom, where its churning legs, long toes and thrusting wings help it remain long enough to find an insect larva or occasionally a small fish. This feat has been compared to cafeteria dining inside a washing machine.

Even the baby birds handle white water like, well, like dippers. Adults often build their soccer-ball-sized nests where the fledgling young go straight from sanctuary to surging stream. "I've seen them hit the pounding current, tumble head over heels, get whipped downstream, then bob to the surface and calmly swim to the side," says Osborn. "However, I don't think this is their preferred way to leave the nest."

The American dipper is the only North American representative of the Cinclidae family, a group of songbirds that includes five species of dippers. It occupies streams in the western half of the continent from Alaska to Panama. The overall population is not known (a rangewide census has never been conducted), but researchers suspect the birds' numbers cannot be large, due to their unusual habitat demands. With development in the western United States often occurring near water, biologists sometimes worry about the dipper's future. "Dippers don't appear to be in trouble yet, but there's a general concern for them because of declining water quality in some places," says Carl Bock, a University of Colorado biologist.

In South Dakota's Black Hills, for example, a 1997 state-commissioned survey of the best habitat turned up only a dozen of the birds, and authorities feared that the creatures would vanish altogether. Since then, however, state biologists and volunteers have attached dozens of nest boxes to the undersides of bridges in the area, and the population has rebounded to an estimated 50 to 75 birds.

Unlike bluebirds and some other species, dippers are not fussy about their artificial digs. Most boxes are simple 7- or 8-inch wooden cubes with the front left completely open except for a 2-inch lip to keep eggs and young from falling out. Dippers prefer boxes placed over the fastest moving part of a stream, typically using them as sheltered ledges on which to build their traditionally elaborate nests. "Our dippers seem to be doing better, but we're still concerned," says Doug Backlund, a biologist with the South Dakota Department of Game, Fish and Parks. "They've probably been isolated here since glacial times, and we'd hate to lose them."

Meanwhile, in Montana, Osborn decided to study dippers in part of the Bitterroot River drainage for her master's degree at the University of Montana. For much of 1996 and 1997, she hiked backcountry trails and scrambled through brush along 140 miles of stream bank on 23 different creeks. She located 49 dipper nests, monitored their productivity, banded birds whenever possible and--ironically--related some elements of dipper success to nearby human development.

Expecting to find human activity harmful to dippers, Osborn was surprised and encouraged by the results of her study. "Dippers are actually doing quite well in the face of development," she says. "Housing and roads, if they don't contaminate the water or ruin stream banks, seem to have no negative effects whatsoever."

Osborn did find, however, that some agricultural activities may be hard on the birds. Cattle can destroy stream banks, trigger erosion, contaminate water with feces and muddy currents--all of which may harm dippers or the insects on which they feed. "We never found dippers in areas that were damaged by heavy cattle use," she says.

Osborn also looked at the effect bridges have on dipper prosperity. Dippers normally nest on mid-stream boulders or rock ledges just above the water, but such sites are scarce, and biologists consider this shortage the major factor inhibiting dipper reproduction. In Montana's Bitterroot Valley, for example, natural dipper nesting sites are spaced about two miles apart in otherwise excellent habitat. However, Osborn discovered that area bridges offered a viable alternative as nesting sites. And in subsequent research, the biologist found that bridge nests in the valley actually produced more young than the natural nests in her study area.

"Some of these bridges don't seem like very hospitable environments," Osborn says, explaining how they shake whenever trucks drive over them. "Yet as long as the integrity of the particular stream remains intact, dippers readily appear to use them." In addition, most bridges are at lower elevations, where milder weather often permits dippers to produce two broods per year. Bridges, she says, may actually be a key to dipper success in many areas.

Although researchers have revealed many dipper secrets, one big question remains: Why do these birds dip? "I've never heard a good explanation and I don't have one either," says Bock, who has studied American dippers extensively. He and other scientists suspect that this behavior, like everything else about dippers, is tied to the bird's rushing water environment.

"Dipping may help them deal with a crazy visual field that is constantly in motion," says Bock. Maybe the relentless up and down motion changes the light angle, allowing dippers to see into the water. Or it may help them remain oriented next to the forever moving current. Or it may be a way of communicating near noisy streams--except that dippers sometimes dip even when they're alone. So who knows? Maybe their habit of dipping just helps these little birds keep fit for those incredible dives into raging torrents.

Montana journalist Gary Turbak wrote about roads and wildlife in the October/November 1999 issue of National Wildlife.