What do baseball players and foresters have in common? A deep appreciation of the white ash 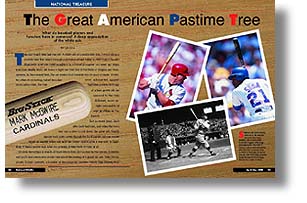 The old tree´s time had run out. A white ash of considerable size, it stood along a country lane that winds through a picture-postcard valley in New York´s Taconic Highlands. And one could imagine it as a robust youngster 140 years ago when men from nearby farms left home to fight the Civil War in the fields of Virginia and Pennsylvania. In the summer heat, the ash invited foot travelers into its pool of shade. In winter, when its sprawling, naked branches were silhouetted against snow-laden skies, the tree had been a textbook image of a field-grown ash (as opposed to the very different, more upright personality of one growing in the forest).


But in recent years, limb after limb had died, and when the town sent out a crew to cut down the great ash, hardly anyone took note--even though the local papers did run stories about an ancient white oak near the corner church after it was split by lightning. It seems people take ashes for granted, if they think of them at all.

Scratch the surface in search of those whose lives are touched by the species, however, and you´ll find plenty who would care about the passing of a grand old ash. Take, for example, Robert Leverett, a founder of the nonprofit Eastern Native Tree Society, who views the white ash as"one of our noblest trees." Or Mike Birmingham, a forest health expert for the New York Department of Environmental Conservation, who is tracking outbreaks of ash yellows, a recently identified disease.

Then there are the boys of summer, like Mark McGwire and Sammy Sosa, whose ash sticks propel horsehide spheres over outfield walls. As the late writer John Madson, who plied his craft in St. Louis Cardinals country, once wrote, the white ash is"the great American pastime tree." (Quite by coincidence, its scientific name is Fraxinus americana.)

Ash wasn´t always the wood of choice in the batter´s box, however, nor is it the only one today. Moreover, aluminum has pretty much taken its place from college diamonds to sandlots. But before we consider the baseball bat´s evolution and its journey from standing tree to dugout, meet the white ash as a living tree through the eyes of Leverett, a leading advocate for eastern old-growth forests.

"I think of the white ash as being one of the more illusive trees of the forest, unlike oaks, which have an overpowering effect," says Leverett, who lives in Holyoke, Massachusetts."Yet the ash is a mighty and incredibly fast-growing tree." He notes that drawings and photographs in handbooks usually depict the trees growing in open, accessible areas."Field-grown ashes can be beautiful," he says,"but in maturity, as limbs are lost, they often develop an ungainly appearance, as if they can´t decide in which direction to invest new growth. By contrast, the in-forest ash is majestic, rivaling the best of the tulip poplars for soaring trunks. However, its gentle upward-curving limbs are most pleasing when the ash has a little growing space."

The white ash belongs to a genus of some 70 species of trees and shrubs that are found mostly in northern temperate regions of the world. Sixteen species reach tree size in North America, but only six are valued for their wood and only one of those, the Oregon ash, is found west of the prairies. Second in commercial importance to the white ash is the green ash, a species that is particularly abundant on the floodplains of the Mississippi River drainage and is known locally as swamp or river ash.

White ash, on the other hand, prefers lower mountain slopes, ravines and coves where the loam is deep, rich and moist but well drained. Ashes are scattered throughout old-growth forests--one tree here, one tree there, comprising at most 5 percent of the whole. (Some of those venerable trees were seedlings at the end of the seventeenth century, as white ash can live for 300 years.)

However, dense clusters of young white ash trees are fairly common in the Northeast where old farms have been reclaimed by second-growth forest. Those stands, unfortunately, are especially vulnerable to ash yellows, which causes a rapid decline in tree growth and a progressive dieback of the branches. Trees of harvestable size that become infected with the microbe, which is transmitted by small plant-sucking insects called leafhoppers, will succumb in 5 to 10 years."There are stands of white ash near Albany where you won´t find a single living tree," says forest-health expert Birmingham. The blight is most severe in areas where the forest has been invaded by fingers of housing and their attendant cultivated plants and weeds that attract the insects."The white ash," he adds,"is a silent victim of forest fragmentation."

The ashes likely owe their name to the ashy gray color of their bark, which on a patriarchal white ash is about three inches thick and deeply fissured in a diamond pattern. The feathery leaves, which unfold after oaks and maples have displayed their spring finery, are composed of as many as 11 leaflets (usually 7 for the white ash). In autumn, when other hardwoods blaze with see-me colors, ash foliage fades to a delicate purple, then bronze and finally a lemon yellow"as though an artist were painting it a different hue every day," says Leverett. At the same time, the branches of female ash trees sag with copious crops of flat, winged seeds that are shaped like elfin canoe paddles and are an important food resource for wood ducks, quail, wild turkeys, grouse, grosbeaks, cardinals and other songbirds.

Beneath that braided bark lies wood that is hard, strong and flexible. Ash is prized for such earthly uses as furniture, flooring and tool handles, while artisans steam and bend it into frames for snowshoes and the keels of handmade canoes--or carve knot-free planks into paddles for powering those classic craft. As Madson wrote,"So what if there are plastic snowshoes and canoe paddles and aluminum canoes. For some of us, the best outdoor toys will always be whittled out of white ash."

That´s especially true of professional ballplayers from Class A towns to major league cities, and the spread of ash yellows has led to alarms about a dwindling supply of wood for bats. But don´t expect the pros to switch to aluminum any time soon. Experts assure us that there´s no impending shortage of ash wood."White ash is probably more abun-dant now than it was in the primeval forest," says Birmingham. Many other hardwood trees also cope with specific diseases, such as oak wilt. Experts concur that the only species in real danger is the elm, from Dutch elm disease.

Certainly the number of ash trees felled to make bats has plummeted since aluminum came out to play in the 1960s. Hillerich & Bradsby burned its famous Louisville Slugger trademark into 7 million wood bats in 1971 and sold 200,000 aluminum ones. The production numbers for 1999 were 1.5 million aluminum bats and only a million turned from ash, with 20 percent of the latter going to professional teams. During the heyday of the wood bat, the company´s sawmills turned 200,000 trees a year into perfectly round billets for the bat makers´ lathes. These days, the Slugger factory needs only 40,000 ash logs a year.

While two out of three big-league players swing Louisville Sluggers, the Rawlings Adirondack bat, made of white ash in the upstate New York village of Dolgeville, is the favorite of others, including McGwire and often Sosa. The power hitters tend to be quite demanding about the length, weight and shape of their weapons--even down to the grain and finish. Cardinals Hall of Famer Stan Musial thought wide-grain bats from spring harvests were harder and less likely to splinter. Boston Red Sox legend Ted Williams ordered narrow-grain bats because he thought they were harder, and he insisted on choosing his own billets. McGwire isn´t happy unless each of his bats in the dugout bin is identical--34.5 inches long and a light 33 ounces.

Back in the late 1840s, as the sport was evolving, any hunk of wood would do. Spokes from wagon wheels made great bats, and flat ax handles were perfect for bunting. Within a few years, though, woodworkers were turning bats for professional players, and in 1858 their governing committee issued the first of many restrictions on bat size, form, wood and color by limiting barrel width. Another milestone came in the year 1884, when 18-year-old Bud Hillerich, whose father made butter churns, designed the first custom bat for Pete Browning, nicknamed the"Louisville Slugger."

A variety of woods, including mahogany, bamboo (a disaster) and willow (banned in 1890 for being too flexible) have been used in bat making, but hickory ruled the major leagues well into the 1930s. Hickory is heavy, and cudgels wielded by such giants of the game as Babe Ruth and Ty Cobb were as long as 42 inches and weighed 44 ounces. Today´s sluggers want short, light bats with big barrels and thin handles that will whip the ball into the bleachers. They do, but the bats break at a rate of 500 per team per season, sometimes endangering players and fans. Enter the Sam Bat, made in Quebec from the sugar maple´s hard sapwood and approved for the majors in 1998.

The Sam Bat is the creation of Sam Holman, a former set designer for Canada´s National Arts Centre."Ash bats are at the point where they barely sustain the force of the game," he says."Maple is a heavier, denser wood, and my bat has a leaner, meaner barrel." One believer is Jose Canseco of the Tampa Bay Devil Rays, who swears that baseballs fly farther with the Sam Bat. Several other major leaguers have switched from ash to maple, and Holman turned 3,000 bats last year. That hardly seems like a threat to the supremacy of white ash, but in sports you never know.

Meanwhile, ball players could follow the example of old-time Cardinal Rip Collins: He fenced his house with broken bats.