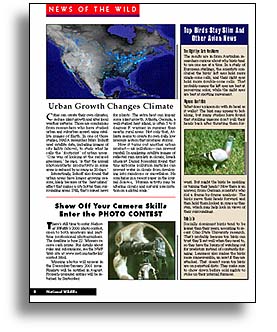 Cities can create their own climates, reduce plant growth and alter local weather patterns. Those are conclusions from researchers who have studied urban and suburban sprawl using satellite images of Earth. In one of those studies, NASA researcher Marc Imhoff used satellite data, including images of city lights (below), to study what he calls the "footprint" of urban areas. "One way of looking at the reduced greenness," he says, "is that the annual photosynthetic productivity in some areas is reduced by as many as 20 days."


Interestingly, Imhoff also found that urban areas have longer growing seasons, likely because of the "heat island" effect that makes a city hotter than surrounding areas. Still, that´s mixed news for plants: The extra heat can impair some plant growth. Atlanta, Georgia, a well-studied heat island, is often 5 to 8 degrees F. warmer in summer than nearby rural areas. Not only that, Atlanta seems to create its own daily low pressure system that produces storms.

Now it turns out another urban product--air pollution--can prevent rainfall. In analyzing satellite images of reflected rain droplets in clouds, Israeli physicist Daniel Rosenfeld found that tiny airborne pollution particles can prevent water in clouds from developing into raindrops or snowflakes. He concludes in a recent paper in the journal Science, "Human activity may be altering clouds and natural precipitation on a global scale."